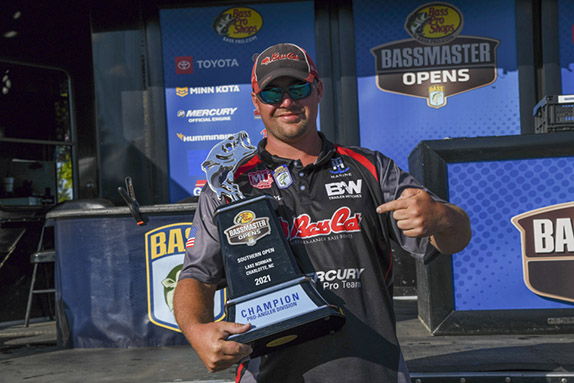 Cody Hoyle called it on day 2, but it took the North Carolina pro nearly all of the final round to catch the 8-02 bag that completed a winning three-day total of 40-04 at the Lake Norman Bassmaster Southern Open on Saturday.

“I thought 8 to 10 pounds today was going to do it,” Hoyle said after establishing a sizable lead in Friday’s semifinal round.

On day 1, Hoyle was in 2nd place, trailing Blake Smith by 14 ounces. A day later, he owned a 6-07 lead over Joey Nania. Then on the final day, Hoyle beat out Nania with a winning margin of 3-09.

“This is pretty amazing; I really wasn’t expecting to win,” said Hoyle, who earned $43,533. “I entered this tournament thinking I’d get 11 pounds a day. I was actually surprised that I caught what I caught. This is probably the best I’ve done on this lake.”

Because Hoyle did not fish all three of the Southern Opens, he is not eligible for the automatic berth into the 2022 Bassmaster Classic. That spot now goes back to the Bassmaster Elite Series where Tyler Rivet, the first man out of the cut, will receive a Classic invitation.

After spending the first two days in Mountain Creek where he targeted docks in 10 to 20 feet, Hoyle made a switch for day 3 and fished docks and marinas in Davidson and Ramsey creeks. Concerned he had fished out his area’s potential, Hoyle decided a change of scenery was due.

A painfully slow day unfolded for Hoyle as the local angler found himself with one keeper at 1 o’clock. Hoyle admitted it was a stressful scenario, but knowing his better day-2 bites came in the afternoon, he embraced a statement he made after each of the first two days: “You just have to keep moving and keep your bait wet.”

At 1:15, Hoyle came tight on the first of two big fish, an estimated 3 1/2-pounder. Fifteen minutes later, he boat-flipped a 3-pounder that sealed the deal.

“I thought I was just going to have that one, to be honest,” Hoyle said. “I just started running stuff that I’ve caught them on in the past. That marina where I caught those fish, I’ve fished it for 10 years. It’s always been good to me.”

While a dropshot with a 6-inch Roboworm in morning dawn produced a couple of keepers on days 1 and 2, Hoyle caught most of his fish on a homemade 1/2-ounce Arkie-style jig with a Zoom Twin trailer. Using green pumpkin and orange for the head and skirt allowed him to leverage two common forage items.

“I tied that jig to look like a bream or a crawfish,” Hoyle said. “The crawfish on this lake have a green back and their bellies are orange. That’s what the jig looked like.”

After spending a relatively slow morning on a main-lake shoal in 30 to 35 feet, Nania made a late-day transition that accounted for most of his weight.

“I was struggling out there, but my wife had written me this awesome note with a Bible verse about staying steadfast,” Nania said. “I only had 8 pounds at that point and after I fished some docks, I was looking around with my Garmin LiveScope and I saw a tree out in 40 feet of water. I threw out there and caught a (3.8-pound spotted bass).

“After that, I said ‘I’m going to run more trees,’ so I went and caught another 2.6 off a tree I’d fished three times in the tournament and never got a bite. It just worked out.”

Nania caught most of his fish on a Nedmiki rig – Z-Man’s version of the Damiki or “moping” rig. Comprising a Z-Man Finesse EyeZ jig with a 3.75 StreakZ trailer, Nania’s rig proved effective at teasing fish out of brushpiles and tempting the bites he needed.

“I found a wolf pack of fish running the shoreline. It was exciting; some of them would hit it right at the boat.”

David Williams of Newton, N.C., won the Southern Open standings with 577 points. Jacob Foutz of Charleston, Tenn., finished 2nd with 568, followed by Josh Douglas of Isle, Minn., with 545, Blake Smith of Lakeland, Fla., with 541 and Sam George of Athens, Ala., with 528. Williams, Foutz and Douglas will receive invitations to fish the 2022 Bassmaster Elite Series.