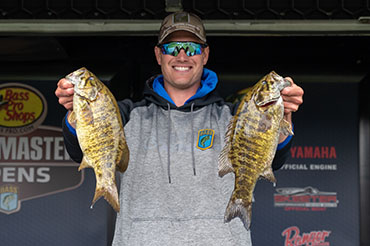 Bill Perkins caught only a five-bass limit Friday, but that 17-pound bag was enough to keep the New York pro in the lead on day 2 of the Bassmaster Northern Open at Oneida Lake in Syracuse, N.Y.

Another windy day presented challenging conditions for boat positioning and bait presentations. However, Perkins got his work done in short order. Day 1 saw him struggle through a frustrating morning, during which he caught several drum before finally boating a smallmouth bass at 11:30.

“I had five by 10:04 today, so that was a huge stress relief, to actually catch them in the morning instead of waiting all day,” Perkins said. “It was super-tough. Today, I had five bites; yesterday, I had six. It’s just an absolute grinder out there.”

Sticking to the mid-lake region, Perkins returned to the same spots he fished on day 1. Fishing a total of 15 locations Friday, he said a third of them produced his weight.

“After I caught my weight, I ran around and tried to cull,” Perkins said. “My co-angler had one and I was trying to help him get his other two. We ran a bunch of stuff, but everything is just pounded.

Perkins again caught his fish on a mix of dropshots and Ned rigs and fared best with a slow, meticulous presentation. Given the lake’s wind-whipped conditions, he had to make strategic tackle adjustments.

“Just like yesterday, because it was so windy, I had to use heavier weights just to keep a bait on the bottom,” Perkins said. “Also, it’s super-important to be able to feel the bait because the wind blows your slack and it’s super-tough to feel. So, the heavier weight helps a little bit with that.”

Saturday’s forecast calls for more wind, but with the field cut to 10 boats, Perkins is optimistic.

“I was sharing water with a bunch of guys (today),” Perkins said. “Hopefully, tomorrow I won’t have to.”

George started the day on the spot where he ended day 1 and caught his fish on finesse baits. The area had an attractive-looking rocky bottom in 18 to 20 feet.

“My bite numbers were way down today, but when I got a bite, it was a good one,” George said. “Smallmouth like to roam and it doesn’t take much to make them move. We had almost a 180-degree wind shift and I kind of expected them to move today.

“I caught them pretty early and I had most of my weight at 9 or 10 o’clock. I kind of expected to have another shot to cull up throughout the day, but I just never did. The wind made it very difficult to (make an effective presentation).”

“I fished the same areas I fished yesterday; I just fished them a little differently,” Slegona said. “I was focusing on the windblown sides of main-lake rock shoals in 10 to 12 feet. Time of day didn’t matter; it was just mostly timing, whenever they would turn on and feed.”

Slegona rotated through about 20 spots and caught his fish on five of them. He fished a Carolina-rigged Zoom Speed Craw in grassy areas and switched to a 1/2-ounce Keitech football jig with an Erie Darter trailer for areas with less grass.

Saturday’s takeoff is scheduled for 6 a.m. ET at Oneida Shores Park. Weigh-in will take place at the Bass Pro Shops in Auburn, N.Y., at 3:15 p.m.

Here are the totals for the 10 anglers who advanced to the final day: