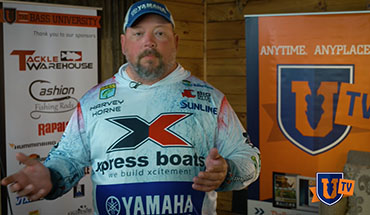 Arkansas Bassmaster Elite Series pro Harvey Horne has a special appreciation for swing-head jigs. After all, he relied heavily on one to reach his greatest achievement at B.A.S.S., a victory at the 2018 Central Open on the Arkansas River. His use of this tool has only broadened from there, and has produced a Top-12 in the seemingly unlikely venue of the St. Johns River.

“It’s one of those baits that you can do a lot of different things with,” he said. While it is often thought of as an offshore tool, and Horne said he’s primarily a shallow-water angler, he also noted that, “I literally have this tied on 99 percent of the time through the year at each and every event that I go to. This is where I make my money.”

He typically fishes it on a 7’6” heavy or extra-heavy Cashion Elite or Icon rod paired with an 8.1:1 gear ratio Daiwa Tatula baitcasting reel. The high retrieve speed is not necessarily to work the lure, but rather to catch up with a fish that grabs the bait and runs toward him. With two turns of the handle he can pick up 6 feet of line. The long rod also allows him to take up a lot of slack on the hookset. He most often uses 18- to 20-pound Sunline Sniper fluorocarbon.

His favorite soft plastic for the technique is a Big Bite Baits Fighting Frog in the 3-, 4- and 5-inch sizes. He pairs it with a custom-poured swing-head made with a Gamakatsu G Finesse Worm hook. He likes the big gap for a high hookup ratio. He tailors his color choices to water clarity, but some of his favorite patterns include Vegas Flash (clear water) and Confusion (mildly stained water). If he’s on a new lake where he doesn’t know what to expect, he’ll typically start with a green pumpkin and watermelon red laminate.

In the spring, he’ll fish a 7/16- or 1/2-ounce model around secondary points with gravel or wood all the way up until the bass hit the beds. In the summer, he’ll go heavier – often as big as a 3/4-ounce – and fish it on main-lake points. The shad spawn is one time when he’ll take off the Fighting Frog and replace it with a Big Bite 4.8-inch Pro Swimmer in some sort of shad color He’ll fish it fairly high in the water column and then let it fall into holes in the grass or drop after coming over wood cover. In the winter, he’ll fish 5/16- and 3/8-ounce models on shallow main-lake points in 3 to 12 feet of water, looking for fish that are actively feeding.

While Horne has his favorite soft plastics to use when money is on the line, he said that everything from a straight-tail worm to a lizard or a centipede can work. “You need to keep an open mind with the swing-head,” he said. “Let the fish tell you what they want.”

If you want to learn some other information about how Horne uses a swing-head jig year-round, including his tips on avoiding hang-ups and how he rigs the Fighting Frog to make it last for more fish, check out his full video, available only by subscribing to The Bass University TV.