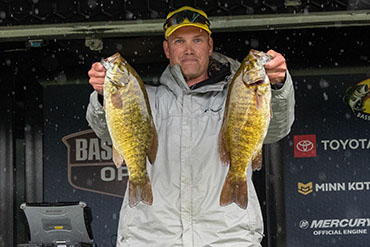 On paper, it looks like Bill Perkins had a great day of fishing, but the New York pro said that leading day 1 of the Oneida Lake Bassmaster Northern Open with 18-11 was anything but easy.

Perkins, who leads 2nd-place Billy Payne of Lackawaxen, Pa., by an ounce, said his day was heavier on quality than quantity.

ôMy weight doesnĺt reflect how tough it was today,ö Perkins said. ôI got lucky and got the right bites. When you see a guy catch (nearly) 19 pounds, itĺs kind of assumed that he (had a good day), but itĺs super-tough.ö

ôIĺm using the standard smallmouth fare ľ drop shots, Ned rigs, stuff like that ľ but I had to increase my weight sizes just to get my bait to the bottom in time,ö Perkins said. ôI wasnĺt using different baits, I just had to make modifications.ö

Slow, patient presentations proved most effective, as Perkins achieved his best results by letting his bait soak in the productive areas.

ôItĺs just a total timing deal, and thatĺs the most terrifying thing for me. I donĺt think I had much throughout the morning; I donĺt think I got a bite from a bass until 11:30 ľ I was catching a bunch of drum.ö

As Perkins explained, what makes Oneida productive can also make it frustrating.

ôOneida Lake has so much great cover that thereĺs a lot of dead water. You have to cover so many spots.ö

Perkins said he caught his bass in a range of 9 to 14 feet. He hit several particular depths and ultimately found a specific type of bottom composition most productive.

Payne caught his 2nd-place limit of 18-10 by fishing what he described as a presentation less common to Oneida. Noting that he was all alone in his area, Payne said he targeted rock structure and left his fish biting.

ôIf you want different, you gotta do different,ö Payne said. ôSo, I mixed it up and went out doing what Iĺm comfortable doing at home. I put it together and we cleaned ĺem up.ö

Although Payne kept his details slim, he said he fished ôone bait, one rodö all day. He said he tried dropshotting, but since that was not in his wheelhouse, he stuck with his power-fishing technique.

Sam George of Athens, Ala., and Thomas Hughes of Cicero, N.Y., tied for 3rd place with 18-02. George caught his bass with finesse baits on two offshore spots. His morning fish came from rocky structure in 20 to 24 feet, and he added three key culls in the afternoon from a slightly deeper spot.

ôI didnĺt have a lot to go on; I only had nine bites (in practice),ö George said. ôI found one place that was a big, vast area and I stayed there four or five hours. I was pretty content with it, and I had probably two hours of fishing time left and I went to a place where I had one bite in practice, but it was a big bite.

ôI didnĺt really know the potential of this spot, but today, when I pulled up, there was a lot more there than Iĺd thought. I culled probably four or five times in the last hour and left them.ö

Hughes said Thursdayĺs inclement weather nixed his plan to throw topwaters in the morning. Drawing on his extensive local knowledge, he worked an area where he knew the fish would be positioned by the east wind.

ôI stayed in one small area all day and ended up getting six bites,ö he said. ôI had to slow down and really let the bait sit in an area.ö

Here's how the initial Top 10 stacks up: