Chalk Talk: Fishing a swim jig all year with Cherry 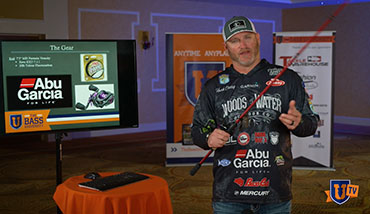 Two-time Bassmaster Classic winner Hank Cherry may be best known for his prowess with a jerkbait, but his Carolina roots have made him a jig fanatic, too. While just about all serious bass anglers use a swim jig at certain times of year, Cherry keeps one tied on all the time, and his technique differs from the typical presentation.

He starts not with a jig designed exclusively for swimming but rather with a flipping jig, most often his 1/2-ounce Picasso Dock Rocket in standard flipping colors like green pumpkin with a matching green pumpkin chunk (hanging from the hook rather than threaded onto it). He fishes it on an Abu-Garcia Veracity 7’3” medium-heavy rod paired with an 8:1 Revo EXD spooled with 20-pound Berkley Trilene fluorocarbon.

In most cases, anglers just retrieve their swim jigs steadily with occasional twitches. “Basically, we’re fishing a swim jig like a spinnerbait without blades,” he said, and noted that it most definitely works, but what Cherry learned by fishing night tournaments on Lake Norman is that sometimes a “yo-yo” technique catches more and bigger fish. The bites feel like “getting your line cut.”

He uses the yo-yo swim jig any time fish are close to the bank and likely feeding on bream. “You cannot have a better bream imitation than just the regular old jig,” he explained. He’ll let it glide and if he gets the sense that fish need something more erratic to trigger them he’ll add in a couple of quick pops. This excels around docks, trees, rocks and bluegill beds, but where it really shines is on do-nothing banks. Fish that have seen tons of spinnerbaits, bladed jigs, crankbaits and worms will jump on them and the hookup ratio will be excellent because they “eat the whole thing.”

In the spring, Cherry will fish the jig around any cover in and near spawning areas, trying to place it as far back under cover as he can. When the shad spawn arrives, he’ll change colors. “I’ve won more money fishing a white jig than I can count, talk about or imagine,” he said. Even when the shad spawn is over, he keeps his eye on crappie fishermen. When they’re loading up on eating-sized crappies, he figures that big bass are patrolling the same areas and a white swim jig is his preferred tool. “Big bass eat big bait.”

If you’re fishing docks, be sure to pattern the areas where the bites come from. Cherry believes that the poles generally produce smaller fish while bass relating to the floats and pontoons are often larger, but there are no hard and fast rules here.

In the summer, he’ll swim the jig not only on riprap (sound familiar?) but also in the backs of pockets, in seemingly stagnant, super-shallow water where the bream-eaters have seen their share of prop baits, but not the jig. He’ll also go offshore to deep rocks, brush piles and bridge pilings. The key in this instance is to cast the lure past the cover and once it’s on the bottom swim it back at the key depth. Once the water temperature gets back down to 75 degrees, the white jig comes back out to imitate migrating shad as the bass feed up for winter.

If you want to learn some other information about how the back-to-back Classic champ swims a jig year-round, including his description of the magic “halo” and an explanation of how he fishes it in winter, check out his full video, available only by subscribing to The Bass University TV.