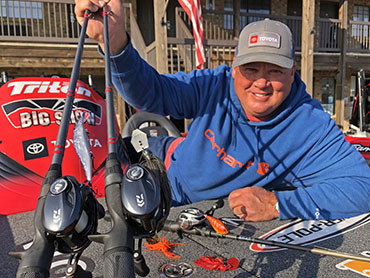 To say largemouth bass eat a bunch of reddish orange-colored lures on Sam Rayburn Reservoir is like saying Terry “Big Show” Scroggins likes to toss a ribeye on the grill, or that Taco Bell sells a bunch of nacho fries. It’s sort of overstating the obvious.

So how then does one of the world’s best anglers like Scroggins set himself apart from the menu offerings of thousands of other fishermen who visit Rayburn?

“Look, I’m definitely going to have my fair share of Rayburn Red tied on, but I’ll promise you it’s not the only thing they eat on this lake,” says Scroggins. “They’ll dang sure eat a green-pumpkin ChatterBait and a shad colored jerkbait here, too.”

ChatterBaits will be among the top three most popular lures this week on “Big Sam,” but Scroggins insist green-pumpkin should never be shelved – even at Rayburn.

“Man, green-pumpkin still works anywhere you go in America, and that includes a green-pumpkin ChatterBait in east Texas,” says Scroggins, who favors a 1/2-ounce version most of the time.

Soft plastic trailers with a lot of kicker tails tend to make a ChatterBait rise higher than sometimes desired, especially if you’re trying to keep it a hair deeper over submerged vegetation or under the floats of a dock. So Scroggins says the weight of a 1/2-ounce version offsets that rise nicely and says the Big Show Twin Minn makes for a great all-around trailer.

As for the jerkbait, he says it simply gets mislabeled as a cold-water lure far too often, when in reality it catches fish darn near 12 months a year.

“A lot of people think of jerkbaits as a smallmouth weapon up north or a late winter tool further south, but they’re an awesome tool anytime you’re trying to present a bait over submerged vegetation that’s a bit more subtle at a place like Rayburn that gets so much fishing pressure,” explains Scroggins.

His jerkbait of choice is a MegaBass Vision 110 on 12-pound line that will get down to about 7 feet, and if he can tick the tops of the vegetation or get it snagged in the salad a tad bit now and then, that’s a bonus to triggering strikes.

So while Rayburn Red lipless baits will likely always be the top “go to” – just as they’ve been for 30 years in east Texas – you can bet that Big Show Scroggins will be serving up some proven tasty offerings not seen quite as often to Big Sam’s seasoned largemouth.