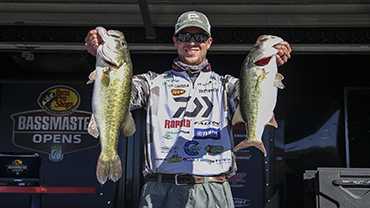 When Patrick Walters happened across a golden opportunity, the Bassmaster Elite Series pro from Summerville, S.C., stepped on the gas and sacked up a five-bass limit of 24 pounds to lead day 1 of the Harris Chain Bassmaster Southern Open in Florida.

Walters, who opened his 2021 season with a 4th-place finish in the Elite tournament at the St. Johns River, said he typically approaches Florida events by moving fast in practice to locate productive areas and then slowing down with methodical tournament execution.

Thursday saw him go off script.

“Honestly, sometimes, it’s just fluke luck,” Walters said of his unexpected morning. “I started throwing a (lipless crankbait) on a spot, and I looked down and saw two of them chasing my bait.

“I said, ‘Okay, maybe there’s some fish here.’ I passed through there, turned around and started whacking them. I probably caught 30 fish there and had my weight by 10 a.m. and then I left.”

Committing his day to Lake Harris, Walters found those morning bass in about 6 feet of water. He attributed the attraction to the right mix of habitat and clarity.

“There’s a little bit of clear water, there’s some hard bottom, there’s some grass; it’s just that good mixture,” he said. “It’s also a little shallower than most people are fishing.”

With a cold front dropping overnight and tournament morning temperatures by about 10 degrees, Walters surmised that Thursday’s post-frontal “bluebird” skies had repositioned the shallow fish. The ones he was catching were post-spawn fish that had pushed out from recent bedding areas and staged in a comfortable recuperation area.

“I should have had about 28 pounds (based on the length of the fish), but every single one of them was skinny as a rail,” he said. “I think they just stopped at the first feeding spot.

“The good thing is I caught them pretty well and I didn’t have to burn any of my other water. I didn’t touch any of the stuff I’d found in practice, so I’m going to go back tomorrow and ride this as long as I can.”

Noting that his spot is most productive in the morning, Walters said he caught his bass on a mixture of lipless baits and jerkbaits. Returning in the afternoon, he found a couple more bites that encouraged him to keep that spot in his day-2 game plan.

“There was some dirtier water that moved in later in the day, so I may go there (on Friday) and not catch another fish, but I pulled in there around 2 and caught a couple more on a Zoom Mag Trick Worm,” he said.

Scott Gibbs of Rome, Ga., is in 2nd place with 21-05. Making his Harris Chain debut, he crafted a concise game plan of targeting hydrilla and eelgrass in Lake Harris and Little Lake Harris and stuck with it all day.

“My plan was to hit some areas where I thought there’d be some good post-spawn fish,” Gibbs said. “I had three key areas and I made a little milk run.”

Alex Wetherell of Middletown, Conn., is in 3rd place with 20-11. He looked for shallow bed fish, but when that search came up empty, he moved offshore and used a combination of moving baits and slower presentations to target post-spawn bass in deep grass.

“I looked for the thicker stuff and the cleaner the water, the better,” he said. “Those were the only two good spots I had and I milked them all day. Thankfully, they had some good fish on them.”

Charles Proctor of Conway, S.C., is in the lead for Phoenix Boats Big Bass honors with a 9-00 largemouth.

Here are the totals for the initial Top 10: