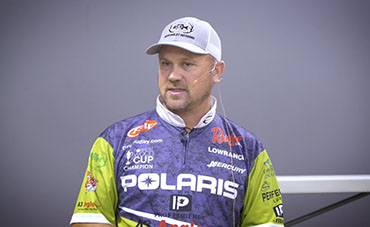 Virginia pro David Dudley says that in some tournament seasons, 80 percent of the fish he weighs in may come on spinning rods.

“My baitcasters have dust on them,” he joked.

But beyond the one-liners, it’s no joke to one of the sport’s all-time leading winners. He’s found a system that works for him and he’d like to be able to pass it along to more anglers. Unfortunately, there are no hard-and-fast rules.

“People always want that manual,” he said, and then compared fishing to chess, saying that the key is to become a student of different scenarios and able to adapt to anything thrown your way. A big part of that is catching fish when times are tough, which often necessitates spinning gear and light line.

That may start with a shaky-head. “It’s a technique that I’ve used to win a lot of money,” Dudley said. His number one rule for this technique: “Never, never, never, never take it off the bottom.” He tested all of the available stand-up heads in a swimming pool and found none of their performance to be satisfactory, so he developed his own for Perfection Lures. It uses two little prongs to make sure that your straight-tail worm or soft stickbait moves across the bottom like an inchworm. Less is often more. “The bottom is going to dance your worm better than you could do.”

In recent years, he’s also become a devotee of the finesse swimbait.

“This is the one game you need to study,” he said.

While he uses the hollow belly-style lures on the tournament trail, in this case he’s generally referring to the smaller, boot-tailed, ribbed variety, like the Keitech Fat Swing Impact or the Strike King Rage Swimmer. “I will always have a Keitech on the deck,” he said. His most-used colors are Pro Blue Red, Rainbow Shad and French Pearl – while there are numerous other productive patterns available, he said that those three cover a wide variety of forage and water colors.

While these small baitfish imitators are effective on a wide variety of jigheads, Dudley said that precisely matching the weight and shape of the head to your conditions is critical. “It’s about getting more bites,” he said. That is why in addition to the standard 1/4-, 3/8- and 1/2-ounce jigheads, he also carries 3/16, 5/16 and 7/16. The ones that he likes the best are poured by his son. He fishes these swimbaits on a 7’2” medium-heavy Profishiency rod and spools his reel with 20- or 30-pound Gamma Torque Braid attached to a leader of 10- to 16-pound Gamma Edge, joined by an Albright Knot. He said that unlike with a crankbait, where one or more of six hooks are likely to grab onto even a short-striking bass, with a swimbait you have to remain “laser-focused.” You have a single hook, you’re making long casts, and the bites are often difficult to detect.

If you want to get more insight into the strategies behind Dudley’s longstanding success, including his belief that “Crappie fishing is the number one thing in the world you can do to train yourself as a bass fisherman,” check out his full video, available only by subscribing to The Bass University TV.