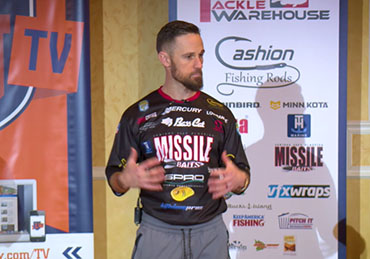 Like most pros, John Crews has spent thousands of hours behind the wheel of a bass boat and has learned some strategies for getting the most out of his vessel without getting pounded to death or destroying his equipment.

Some of it boils down to pure awareness. “There are no stop signs on the water,” he said. “Check your surroundings.” It also pays to recognize that a high-performance bass boat operates differently than other types of boats. “I know people with captain’s licenses that suck at driving a bass boat.”

For new boat drivers, you need to forget what you know about driving a car or truck. First of all, the boat has no brakes, so “everything has to be planned.” Second, without wheels, the boat pivots based on rear propulsion. That switches when you shift into reverse, at which point the motor is going to be pulling the boat.

He’ll start with his motor trimmed all the way down, and advises you not to be timid about using the throttle at blast off. Otherwise it will take too long for the bow to break over. Once you do get on plane, then you can ease off the throttle.

“Trim is the key to taking turns at speed,” he said. If you’re trimmed up too much, the front of the boat will start bouncing. At that point, you’ll need to bump it down until it stops. If it gets too wild bouncing in a turn, the worst thing you can do is back off the throttle. If you do that too suddenly, the front end will grab and the boat will do a 180. It’s better to ease off of the throttle until the boat gets to a controllable speed.

Of course, we all like to see how fast we can drive our boats, but that’s when trouble is most likely to occur. Crews starts off by being acutely aware of wind speed and awareness of his surroundings. He’ll trim up in increments to see how it affects performance, and when the boat starts to walk he’ll trim down two bumps. If it still wants to chine walk a little, drive through it.
Eventually you’ll be able to feel it in your hands and in the seat. “I rarely even look at my trim gauge anymore,” Crews said. “I trim by feel.”

When heading into waves, Crews keeps the boat trimmed down to the mid-range, which keeps the boat in the water and allows the “V” to spread the waves. When going with waves, he keeps the bow up higher to avoid spearing a wave. If possible, parallel the waves – if you can run the troughs even 10-footers may not be a challenge – and tack to blunt their impact.

“There’s no need to be in too much of a hurry,” he concluded.

If you want to learn some more about how Crews gets the most out of his Bass Cat, including his thoughts on jackplates, props and how to properly load your tackle, check out his full video, available only by subscribing to The Bass University TV.