B.A.S.S.' Gilliland appointed to habitat board 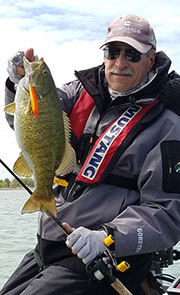 “In this new role with the National Fish Habitat Partnership Board of Directors, I will be representing not only the 515,000 B.A.S.S. members but the broader community of freshwater recreational anglers,” said Gilliland. “My goal in volunteering for the NFHP Board is to ensure that freshwater recreational fishing is a priority in the decision-making and funding process.”

Federal funds flow through NFHP in the form of grants to local entities that do the hands-on work of protecting and restoring fish habitat in streams, rivers, lakes and reservoirs, while the organization also helps leverage state, tribal and private funding resources to support these programs. While many of the partnerships have species-specific interests – such as brook trout or salmon – others are regionally focused, such as protecting Midwest glacial lakes and the Great Lakes Basin.

The bipartisan America’s Conservation Enhancement Act, which passed in late 2020, requires that Fish Habitat Partnership projects address the causes and processes behind the decline of fish or fish habitats, achieve measurable habitat conservation results and lead to increased fishing opportunities.

“As an angler myself, I am excited to learn more and support these projects,” said Gilliland. “Healthy and abundant habitats produce more fish. And when there are more fish, there are more opportunities for recreational fishermen.”

B.A.S.S. has a long history of holding positions on national-level boards and councils that deal with fishery policy. B.A.S.S. already works with the Reservoir Fish Habitat Partnership and its Friends of Reservoirs Foundation (FOR). It is the only partnership that has a nationwide reach and works primarily to enhance sportfish populations. Several B.A.S.S. Nation chapters have received grants through the Reservoir Fish Habitat Partnership and the FOR Foundation.

Among the other conservation and advocacy groups B.A.S.S. partners with are the Congressional Sportsmen’s Foundation, which works with Congress, governors and state legislatures to protect and advance hunting, angling, recreational shooting and trapping, the American Sportfishing Association, Center for Sportfishing Policy and Theodore Roosevelt Conservation Partnership.