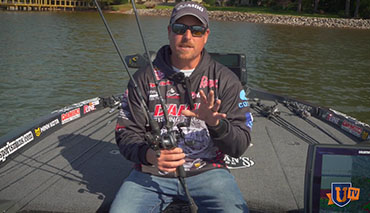 When bass of any kind are suspended in clear water, North Carolina superstar Bryan Thrift is quick to reach for an underspin with a swimbait on the back. He likes the ones from Damiki, in both 1/4- and 3/8-ounce weights. He puts a 3-inch Damiki Armor Shad on the former and fishes it in 10 to 20 feet of water, and uses a 5-inch Armor Shad on the latter and uses it in the 15- to 35-foot range. He likes the Damiki underspin over the competition because it has a recessed head that allows it to be rigged super-straight, and also because it has a blade that is thinner and not as cupped as other models, which means it’ll still spin when you fish it exceptionally slowly.

“It’s just a great slow-rolling bait when they get on those small baitfish and they won’t react to anything else,” he explained.

He keeps his patterns fairly simple. “Water clarity determines my color,” he said. When it’s really clear, he likes Tennessee Shad. In slightly lesser visibility, he prefers white with silver flake or PB Silver. His favorite head color is the “natural shad” pattern. “Hands down my favorite in a clear water situation is the natural color. It’s just a straight lead head with a clear coat over it so it doesn’t get dull.”

He throws both of them on a Fitzgerald Stunner 7-foot medium-heavy casting rod. Even with the smaller bait, he likes casting gear over spinning because the straight fluorocarbon he uses on his Abu baitcasters allows him more depth control than the braid-to-fluoro combo he uses on spinning tackle. The heavier lure demands 10-pound P-Line Tactical Fluorocarbon and the lighter one is fished on 8-pound from the same lineup.

One difference is the reel. He uses the Abu-Garcia REVO AL-F with the 3/8-ounce and the REVO MGX Extreme with the 1/4-ounce

The applications in which this underspin/swimbait combo can be employed are widely varied, but the key similarity is that the bass should be suspended. He fishes the underspin around offshore brush, points, drains and at the mouths of ditches. It excels around bridge columns where the pendulum action is tantalizing, and you can fish it at any depth, depending on how long you let it fall and how fast you wind it in. Instead of throwing a jig or shaky-head on deep (20-foot-plus) docks, Thrift will often pull out the underspin. “They use the shade of that dock as structure,” he said.

Finally, when the fish does tap at or engulf the lure as you retrieve, resist the urge to cross its eyes with a flipping-style hookset. With the ultra-sharp hook of the underspin, a simple “wind set” is often the best way to button them up.

If you want to learn some of the other secrets of how Thrift uses the underspin for suspended bass in clear water, including how he makes sure to rig it super-straight (an absolute necessity), check out his full video, available only by subscribing to The Bass University TV.