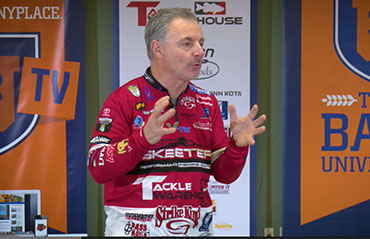 By the time fish move out of their winter patterns, anglers stirring with cabin fever may be ready to crank a groove in the lake’s bottom. But veteran Kentucky pro Mark Menendez says that while crankbaits can be valuable tools, aimless chunking and winding is a waste of time. If you tailor your hard-bait strategy to changing springtime conditions, though, you can enjoy some of the best angling of your life.

He believes that there are key water temperatures – with some geographic variations – that alter fish behavior and in turn determine which lures to use.

It starts in the upper 30s, and if it’s raining and dirtying the water that can make for a tough bite. “Muddy, cold water is the toughest condition that we as fishermen have to face,” he said. “In cold water we need clean water. Bass become sight feeders in clean water.” He uses a “three to five” ratio, which means that if he can see his lure a foot deep, he expects that the fish can see it 3 to 5 feet away.

At this point in the year, it’s critical to slow down your presentations. Accordingly, he recommends that you sit in a chair on the boat, which not only ratchets back your pace, but decreases your chance of falling in. One other trick he uses is with his reel. “I don’t fill my line all the way to the capacity,” he explained. That takes an already-slow 5:1 reel and makes it considerably slower. He also continues to use a fiberglass rod for all of his cranking.

His key crankbait at this time is a Strike King Series 3. “That’s the baddest little dog ever,” he said. The rounded bill deflects off cover, which is key because “you want that bait to do something abnormal.” He uses it on rocky banks, typically on “little flat spots that have deep water adjacent to it.”

When the water temperature gets a little warmer, but is still below 45, he likes a suspending jerkbait because it pulls fish to it – as long as you have at least 15 to 18 inches of visibility. Your job is to figure out how hard to jerk it and then how long to allow it to sit still. Colder water typically means softer pulls and longer pauses.

Once the water gets into the upper 40s, that’s when he turns to a Strike King Red Eye Shad. Contrary to some anglers’ perceptions, he believes “you don’t have to have vegetation to be effective with a lipless crankbait.” The key to the lure, he said, lies in its fall. “I’m literally fishing this bait like a jig,” and the “death quiver” is what puts most fish in the boat.

From 48 to 52 degrees, he also adds in a Strike King Series 4, a wide wobbler that is exceptional in hydrilla, and is also better in stained water than some of its narrower-wobbling counterparts. He fishes it on the “late little bit of verticality” in the backs of creeks, near their flat sections.

If you want to learn some of the other tricks that Menendez has learned over the course of his successful career, including the critical importance of a “false eye” on your lures, check out his full video, available only by subscribing to The Bass University TV.