Zaldain: Bend the hook on swimbaits 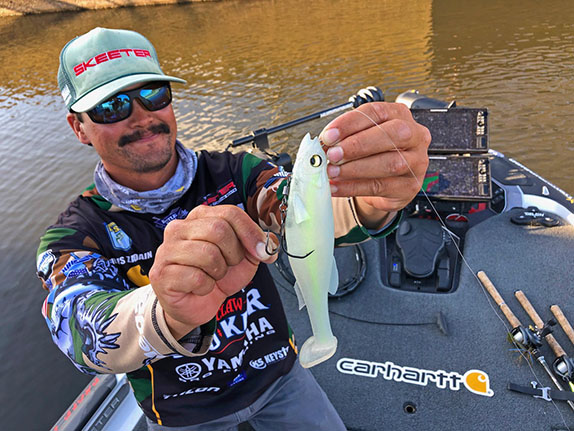 The Megabass Magdraft rigged swimbaits Chris Zaldain uses most frequently to catch super-sized largemouth range in price from $13 to $25 each. Yet, the first thing he’ll tell you to do is bend one of the three shanks on the factory treble out to nearly 90 degrees, and then use your pliers to squeeze the other two shanks closer to one another.

“Obviously, every facet of these baits is designed with meticulous detail and innovation, including the hook they come rigged with, but there’s two great reasons to straighten the one shank to nearly 90 degrees,” Zaldain said. "First, by straightening it out and then reinserting it in the body, it stays anchored in the belly of the bait way better when it splashes down at the end of a long cast. And secondly, when I skip it around and under docks, it stays anchored way better too."

Zaldain’s habit of using pliers to squeeze the two remaining exposed hooks closer is a reflection of years spent casting these favorite lures. And experience has taught him he lands more fish under those circumstances.

Fact is, he’s won a million bucks fishing professionally, cashing a check in 72 percent of the B.A.S.S. events he’s competed in, and he’ll unapologetically tell you if conditions allowed, he throw a Magdraft swimbait nearly every day. Thankfully for all of us wanting to learn more, his gracious advice doesn’t stop at how to bend the hooks.

> Just out of sight, and barely get the tail wagging – “Just like Jimmy Houston taught us all to retrieve a spinnerbait just deep enough to where you could barely see it flash, the same rule pretty much applies to swimbaits,” says Zaldain. “And as far as the speed of retrieve, you want to wind it just barely fast enough to get the tail wagging – no faster, no slower.”

> Throw it at the most obvious stuff – You might think fishing pressure and a subsequently educated population of largemouth has ruled out most of the obvious forms of habitat such as bridge pilings, primary points or that lone isolated dock that sticks out like a sore thumb, but Zaldain makes a great point about exactly why you should never pass those places up with a swimbait.

“Those places still hold fish, and while they may not bite a lot of baits on those spots, the thing you have to remember is the fish that live on that obvious stuff are seeing very few if any 6- or 8-inch swimbaits.”

> CZ’s swimbait gear – When throwing his tournament favorite 6-inch Magdraft, he ties it to 15-pound fluorocarbon on a 7.1:1 reel and a 7'2” jig-pitching rod. But when he beefs up to the 8-inch version, his line and rod size follow – choosing 25-pound fluorocarbon and beefier a 7’6” flipping stick.

“People make five or six casts with it and set it back down. You gotta fish it, man. If you throw it long enough, there’s a real good chance you’ll get bit by the size of fish that’ll forever change your approach to this sport we love.”