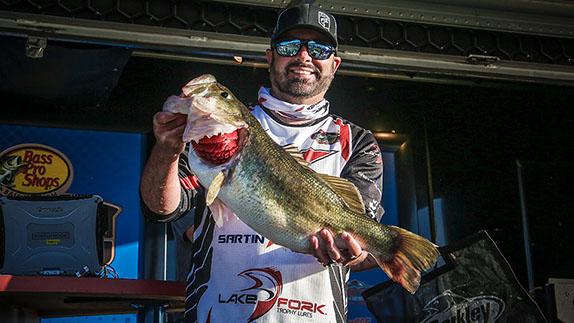 Abundant options nearly overwhelmed Brandon Dillard, but a moment of inspiring clarity set him on a course that led him to a 24-09 limit that topped day 1 of the Lewisville Lake Bassmaster Central Open.

Hailing from Grapevine, Texas, the Lewisville guide said mentally sorting through his vast local knowledge nearly kept him up all night before the opening round. Rising with only an hour of sleep was less than ideal, but an early text from his mother, who was recently diagnosed with cancer, provided a calming influence.

“She said, ‘Just have fun and go fishing,’ and that’s what I did,” Dillard said. “I had my weight by noon and then I stopped fishing. My main thing today was to just stay calm, have fun and not put a lot of pressure on myself.”

Anchoring his bag with an 8-11, Dillard said versatility was essential to his success.

“I’m hitting the shallow stuff early – what’s left of the buckbrush,” he said. “Most of the buckbrush is out of play this time of year, so anywhere you can find some kind of shallow cover like laydowns or stumps early, it’s good.

“When it turned sunny, I transitioned out to deeper (brushpiles), but I stayed shallow while we had the cloud cover and the wind.”

Keeping it textbook, Dillard hit his shallow spots with reaction baits and then switched to slower presentations once he moved deep. His biggest fish, which came off a deep brushpile, required some extra attention, but Dillard’s experience ensured the trophy bass’s safe release.

“When it bit, it felt like a perch and when I swung on it, she came right to the boat with her mouth open the whole time,” Dillard said. “I had to fizz her and I was having trouble getting her to fizz (release excess air from the swim bladder), so I spent about an hour doing that. I wound up getting her stabilized, so she made it.”

Dillard said he plans to repeat his game plan tomorrow. Knowing the lake intimately, he knows he has his work cut out for him.

“This lake can be great one day and a real struggle the next,” he said. “So, I’m going to do the same thing; I’m going to have fun and give it all I’ve got. I’ll fish the same patterns, but I’ll fish some new water tomorrow.”

Tommy Williams of Shepherdsville, Ky., is in 2nd place with 18-08. His day started early and he had his weight by 9 a.m. After that, he simply guarded his area for day 2.

Williams caught his fish out of shallow wood targets in pockets where wind had blown baitfish against the shoreline. Finding particular areas where he could leverage a wind break enabled him to effectively work his spots.

“I was fishing a creature bait dead slow – almost dead-sticking the bait,” Williams said. “Also, very precise flips were important. You had to really fish for them.”

Major League Fishing pro Greg Hackney is in 3rd place with 17-01. In his first visit to Lewisville, Hackney reported fishing a mid-depth range and targeting a particular habitat feature with slow presentations. Covering a lot of water and eliminating the unproductive areas was central to his strategy.

“It’s painstakingly slow; you don’t get very many bites,” Hackney said. “I had a handful of bites in practice and I’m just running my practice, but there’s a lot of dead water for me. I just caught my fish out of a few key places.”

Here's how the initial Top 12 stacks up: