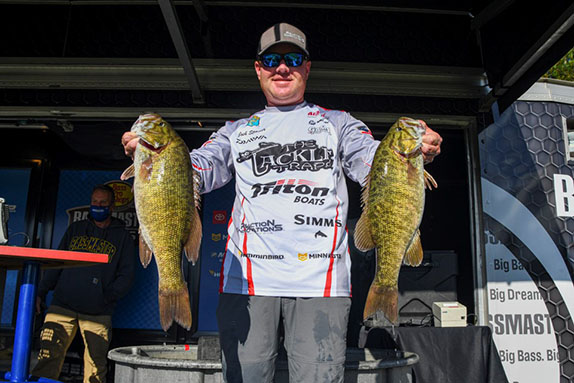 A species-focused strategy aimed at finding the heaviest average weights allowed Josh Stracner of Vandiver, Ala., to take the day-1 lead at the Cherokee Lake Bassmaster Eastern Open in Tennessee with a five-bass limit of 14-12.

Stracner holds a 4-ounce lead over Denny Fiedler of Wabasha, Minn. and Matthew Robertson of Kuttawa, Ky., who are tied for 2nd with 14-08.

“I think the key right now in this lake is catching a limit of smallmouth – I caught all smallmouth today,” Stracner said. “Keeper smallmouth have to be 15 inches and the smallmouth here are so much healthier.

“If you catch a 15-inch smallmouth vs. a 15-inch largemouth, the smallmouth is going to weigh about three-quarters of a pound more. I think they’re just healthy this time of year.”

With a cold front moving through the region, day 1 began with morning rains and cloudy skies that started clearing by late morning. Conditions didn’t seem to impact Stracner’s game as he targeted points in 10 to 15 feet. True to their nature, he found the smallies relating to specific structure.

“They were sitting on one little rock on a point,” Stracner said. “If you don’t know where that rock is, you won't get a bite. I run Humminbird electronics and that was everything.

“They were grouped up; you could see seven or eight of them sitting on one rock. It’s hard to catch more than one or two off a spot, but you could come back a couple of hours later and catch them again.”

Stracner said he had to mix up his presentations. He ended up catching his fish on a variety of baits.

“I think I caught two of them cranking, two on a dropshot and one on a Carolina rig,” he said. “I’d start off throwing a crankbait. I’d make my first two or three casts with that and then I’d throw a dropshot in there.”

Stracner said his spots hold enough potential to carry him through at least day 2.

“I caught them early today, but I hope I didn’t make a mistake,” he said. “I quit at 12 o’clock today and weighed in 2 hours (earlier than scheduled) because I had two fish (that were struggling in the livewell).”

Fiedler said the recent weather played to his favor in terms of a water clarity scenario that he was able to exploit.

“Practice was tough, so I wasn’t necessarily consistent, but I did find a pattern of using moving baits in stained water,” he said. “On Monday, I was able to get a few bites. I didn’t land any of those fish, so I went back there this morning and a 5-pound, 6-ouncer was the first fish I caught.”

Fiedler said he used three different reaction baits. Of his seven bites, one bait produced three and the others yielded two bites each.

Also reporting a slim practice, Robertson said he caught his fish on an offshore spot with rock structure in about 20 feet. The spot had yielded only one keeper bite in practice, but it was considerably more productive on day 1.

“I don’t even know how that happened,” Robertson said. “I think the weather definitely made them bite. I’m just working my ‘wojo’ (winging it plus mojo) and fishing slow.”

Here are the numbers for the Top 12 after the opening round: