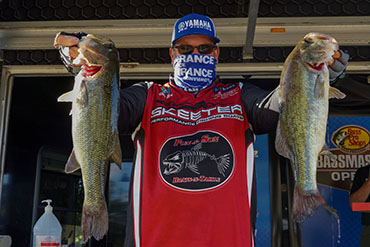 Perseverance was the key element of Cody Bird’s day as the Granbury, Texas pro moved into the day-2 lead Neely Henry Lake Bassmaster Central Open in Gadsden, Ala. with a total of 24-10.

After placing third on day 1 with a limit of 13-01, Bird added another limit that weighed 11-09 to edge 2nd-place Kenta Kimura by 2 ounces.

“It was a struggle today; I probably ran a total of 200 miles and fished 100,” Bird said. “Some of those were spots I fished (multiple times), but I was just trying to hit high-percentage stuff unless I got a gut feeling about stopping somewhere.

On Thursday, Bird said he caught all of his fish on the same spot – a current-related piece of structure that improved with the afternoon’s increasing current flow.

“Today, I never got a bite there,” he said. “I’m just scrambling around and I’m running out of stuff to fish. I’m fishing about a 15-mile stretch. I’m all over the place – the (B.A.S.S. photographers) couldn’t track me down with GPS.

“I’m completely drained from casting. I made at least 1,000 casts today. I kept grinding and grinding and it paid off.”

Bird said he returned four times to the spot that produced a 4-pound bass for him on Thursday, but couldn’t get bit.

He said he looked for similar spots where current washed past hard cover such as docks, laydowns and rocks. His efforts produced eight keeper bites, three of which came off the same spot.

“I caught my fish on several different reaction baits,” Bird said. “I’m just junk fishing based on whatever’s in front of me. Most of my spots have deep water close. That’s the deal, current and deep water.”

“I’m surprised by that; I was just trying to catch them the way I know and it just worked out,” he said. “I had to change up from yesterday. I was fishing too shallow yesterday, so I dropped a little deeper to a range of 8 to 15 feet.”

Filling his bag with all spotted bass, Kimura said he caught his fish with crankbaits and finesse presentations. He didn’t have a fish at 11 a.m., but dialing in the right scenario allowed him to sack up his day’s weight.

“I have a spot that worked really well and I hope I can do it again tomorrow. At least I know how much quality is here.”

“I caught that (big) fish with about 10 minutes to go,” Browning said. “I didn’t have a great numbers day, but it turned out to be the right ones.”

Browning targeted wood, riprap, chunk rock and gravel banks. He caught his bass on a Z-Man JackHammer ChatterBait with a Z-Man Razor ShadZ trailer, a jig and a tube.