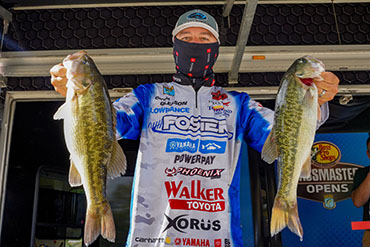 Playing the fall game the way it needed to be played allowed Darold Gleason of Many, La., to take the day-1 lead at the Neely Henry Lake Bassmaster Central Open with 13-12.

Gleason, who finished 5th at the Central Open on Sam Rayburn Reservoir, holds a 2-ounce lead over second-place Derek Hicks.

A mostly warm fall has the fish slowly transitioning into traditional autumn trends, and that means they’re scattered and difficult to pattern. Gleason was understandably slim on details but said he found his fish by remaining mobile and showing them a mix of aggressive and subtle looks.

“I had 12 rods out; I have a moving-baits side and I have a ‘beg-em’ side – dragging baits, spinning rods, shaky-heads, little jigs, that kind of stuff,” Gleason said. “I just alternated between beg-em and moving, beg-em and moving.

“I alternated between the two, kept my foot on the trolling motor and just tried to run into as many as I could. I covered 20 miles on Neely Henry and caught my fish in an area of 3 to 4 miles.”

Gleason said that, given his event preview, a strong opening effort was unexpected.

“Practice was horrible, so I did not expect this,” he said. “Today was, by far, the best day I’ve had since I’ve been here.”

Pointing out that he got only six keeper bites, Gleason said he had to fish a mixture of habitat to amass his leading limit.

“It was a little of this, a little of that,” he said. “This, to me, is a classic junk-fishing derby and, typically, that is not a strong point for me. I’m working diligently to get better at it and I’m learning on the fly.”

Gleason said the key to his strong performance was mental clarity.

“The biggest thing – and it’s taken me years to get this through my thick skull – is that when you have a bad practice, the first day of the tournament you just keep a fresh mind and don’t be afraid to kinda halfway practice,” he said. “So I went and fished areas where I thought I could get some bites and when I didn’t, I kept going, kept going, kept going.”

That persistence was tested when Gleason completed the first several hours of the day with an empty livewell.

“You go 3 or 4 hours without a bite and it’s easy to get down and worried, so I would say my (positive) attitude was the biggest thing that worked for me today,” he said. “I was paranoid, freaking out, wondering if I was ever going to catch one.

"It was just one of those dream days on a tough fishery and to have it come together was special.”

Hailing from Rocky Face, Ga., Hicks earned his limit of 13-10 by mixing up his presentations with a 5/8-ounce jig with a Zoom Super Chunk trailer, a shaky-head with a Zoom Trick Worm and a ChatterBait with a Zoom Swimming Fluke Jr. trailer.

“I’m fishing everything that comes in front of me,” Hicks said. “I caught them all throughout the day and I knew I had a decent bag when I threw back a 2 1/2-pounder (late in the day).

“I went as far north as a bass boat can float and fished all the way from Gadsden north. I’m going to do the same thing tomorrow.”

Cody Bird of Granbury, Texas, is in 3rd place with 13-01. Noting that his day comprised a mix of techniques that yielded 10 keeper bites, Bird anchored his sack with a 4-pounder around 11 a.m.

Fishing a variety of wood habitat, Bird said he missed a big bite early. He returned late morning and caught a 4-pounder on the same spot.

“I caught my biggest one in practice there,” Bird said. “I think it’s a current-related deal that’s replenishing.”

Here are the totals for the initial Top 12: