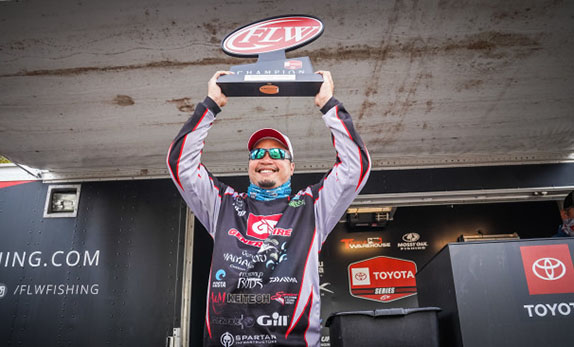 Tai Au caught a tournament-best 26-04 stringer on Saturday to claim his second Western Toyota Series win of the year and wrap up the circuit's Angler of the Year title at Clear Lake in California. The Arizona resident compiled a 3-day total of 63-03 to win by a 5-04 margin and earned $24,635.

Au also won the Western Division season opener on Lake Havasu in his home state back in March.

“I'm shocked that I won,” Au said on stage. “It's also a little emotional for me because this might be my last Western Division event for a while. I'm planning to go back east and fish the Tackle Warehouse Pro Circuit next year and make my dream a reality.

“I just got a brand new boat and this week was the first time putting it in the water. I spent time breaking in the motor and getting my Lowrance units rigged up. On the third day of practice, I broke one off on a Neko Rig and then caught a 5-pounder in one area and that gave me the confidence to start there during the tournament.”

The area he found ended up being the winning area and he plied it for 3 straight days on the way to victory. Au described the area as a rounded point inside a pocket adjacent to a long flat. He fished in the mid-lake area and the spot had clean water and grass.

The first day, Au relied on a Neko-rigged 5-inch Yamamoto Senko in the watermelon red color on a size 1 Decoy hook. He ended the day with 17-08 and found himself in 13th place.

On the second day, Au returned to the same area. He caught one immediately, but the bite went cold after that.

“I knew they were still there because I could see them on my Lowrance units,” Au said. “They were just nipping at the Neko Rig and I knew I had to change it up to get them to react. I started throwing a Lucky Craft LV 500 in ghost minnow and chartreuse shad and figured out the cadence they wanted.”

Once he figured out how to fish the bait in his area, his catches went way up as he brought in 19-07 on the second day.

“The key was to rip it as hard as I could to get them to react,” he said. “I sat in one spot and made repeated casts to the same place. If you could get the school to fire up, you could catch four or five in a row.”

On Saturday, he returned to his magic area and worked it all day long.

“I parked in that same spot for three straight days. It was a highway for fish coming in and out along the grass.”