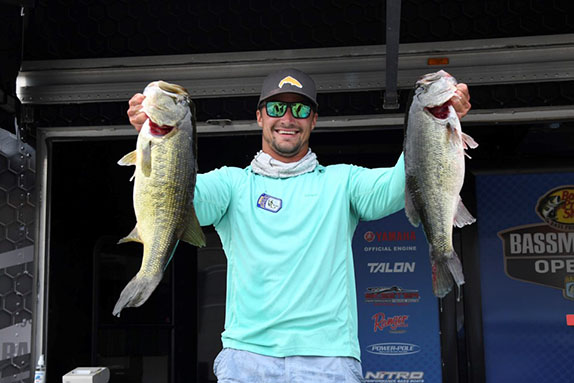 When the window of opportunity opened, Cody Hahner of Wausau, Wis., seized the moment and nabbed a pair of big largemouth bass to anchor a limit of 20-04 that gave him the day-1 lead at the Lake Hartwell Bassmaster Eastern Open

“My morning started off fine and I was on course to catch 11 to 12 pounds, and then I stumbled across something special,” Hahner said. “It was one of those days where, if you fish enough, it will happen. But for it to happen in a tournament was unbelievable. I took advantage of a situation that just materialized.”

He caught those two kickers and several more bass on a mix of reaction baits selected to mimic Hartwell’s sizable blueback herring population. He rotated through a big walking topwater bait, a jerkbait and a fluke.

The key to success, Hahner said, was a blistering retrieve.

“These herring are quick baitfish and you have to keep a bait moving fast to get them to react,” he said. “I was watching spotted bass chasing my bait and there was no way I could keep it away from them.

“A fast, slashing bait was the key. I was just mixing it up and whatever I felt was right at the current moment is what I threw. It seemed like every decision I made was a good one.”

During the usual mid-day slowdown, Hahner turned to a dropshot and a shaky-head.

“There was definitely a midday lull and even into the end of the day, it was tough,” Hahner said. “The fish are getting really beat up. Everybody knows where to fish and it’s just a matter of if you get there at the right time and you just pop one in the head.”

Despite holding a lead of 3-12, Hahner said his day was no cakewalk. With the exception of his magical mid-morning flurry that produced his heaviest two bass, Hahner described a lake full of often indecisive fish.

“Most of the time, the fish are just following your bait back,” he said. “It’s really hard to get a bite. I was just on the bookend of a very fortunate event.”

Looking ahead to Thursday’s second round, Hahner said he wouldn’t hesitate to exploit another golden opportunity like the one he faced today. However, he feels confident that a solid day 2 will advance him to Friday's final round.

“I’m never going to count on something like that happening again, but if it did, it would be great,” Hahner said. “If I can catch 10 to 11 pounds, I’d feel pretty comfortable going into the Top 10.”

Bobby Stanfill of Greenwood, S.C., is in 2nd place with 16-08. With a limit comprising four spotted bass and one kicker largemouth of approximately 5 pounds, Stanfill caught all of his fish on topwater lures. He, too, reported a tough and often frustrating bite.

“Today was just torture,” Stanfill chuckled. “They didn’t bite good today. All the fish were tentative and it was really hard to get a bite. So many would just come up and nip at my bait.”

Stanfill said he tried several combinations of bait styles and presentations. Ultimately, he found a high-speed retrieve with a silent bait (no interior rattles) was most effective.

Scott Martin of Clewiston, Fla., is in 3rd place with 15-12. Noting that he used a mix of reaction baits and slower presentations, Martin said he stayed on the move and hit several dozen spots throughout the day.

“I had to mix it up all day; different times, they’d trigger on different things,” Martin said. “It was a wide range of lures. I just made some good decisions today. That’s what it boiled down to.”

Here's how the initial Top 12 stacks up: