Dobson triumphs at Detroit River with 59-03 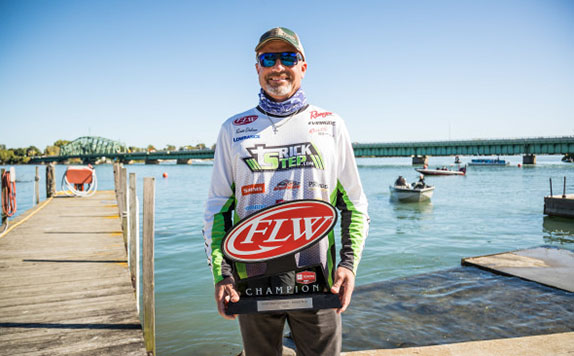 Scott Dobson caught an 18-09 bag on Saturday to win the Detroit River Northern Toyota Series with a 3-day total of 59-03. The win is Dobson’s second in Toyota Series competition and his eighth overall with FLW.

With the whole field pinned in the Detroit River on days 1 and 2 and everything open on the final day, it was almost a foregone conclusion that the winner would do quite a few things. Leveraging his experience on the fishery and smallmouth savvy, Dobson caught fish on more than a half-dozen baits and weighed fish from the mouth of the Detroit River near Erie to the mouth of the St. Clair River in St. Clair.

“I appreciate them making the call to keep us all in the river day 1 and 2, I don’t think I’ve ever fished 16 hours in the Detroit River in two tournament days,” says Dobson. “I practiced like five days for this tournament, I spent 2 days up on St. Clair, and 2 1/2 down here in the river. I grew up here in Trenton, I see a lot of Trenton people here, it’s awesome to win a big tournament out of Trenton.”

Dobson’s baits this week ran the gamut, but aside from a few fish caught dragging, his main players were moving baits. His umbrella rig of choice was a Shane’s Baits Mini Blades of Glory with Keitech Swing Impact FAT swimbaits. For his spinnerbait, he used a 3/4-ounce War Eagle with gold and silver willow blades and a trailer hook. On the jerkbait side, Dobson wielded a Megabass Vision 110+1, a Lucky Craft Pointer 100 and a Duo Realis 100DR.

His dragging baits included a 5-inch tube on a 3/4-ounce head and a magnum Ned rig with a Z-Man Giant TRD cut in half on a 1/2-ounce Nichols Lures Magnum Ned Rig Jig Head. He also mixed in a dropshot with a Poor Boy's Erie Darter and a 3/8-ounce weight.