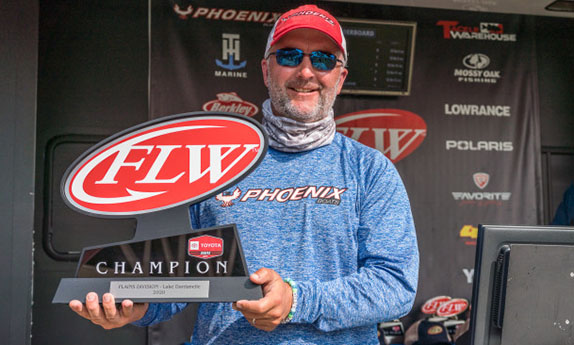 Jason Lieblong is no stranger to Toyota Series titles on Lake Dardanelle. He claimed his first back in August 2015 and added another on Saturday with a 15-15 stringer that gave hime a 3-day total of 40-09.

For winning the Plains Division opener, Lieblong took home over $70,000 thanks largely to the FLW Phoenix Bonus, which earned him an extra $35,000.

Lieblong, who had been steadily catching bass in the lower part of the 34,000-acre Arkansas River impoundment at Delaware Bay, decided midway through Friday’s second round that his fortunes were brighter upriver. With three bass in the livewell, Lieblong and his co-angler, Max Wilson, made a long run to the far upper end and floundered for about three hours without a bite.

“Max Wilson – he’s 79 years old,” said Lieblong. “He kind of got on me like my dad would. He said, ‘Son, what are we doing up here? The fish are down there, and you haven’t caught a fish in three hours.’

Lieblong spent most of the tournament in a relatively small area that teemed with baitfish. He caught most of his fish on a white Z-Man ChatterBait Jack Hammer and a bone-colored topwater by Paycheck Baits called The One, which is no longer produced. He also flipped wood cover with a green-pumpkin Zoom Brush Hog.

Here are the totals for the Top 10: