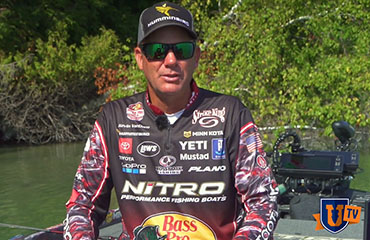 When you think of Kevin VanDam, finesse techniques are not the first things that come to mind.

“I think most everybody out there knows that I’m a power fisherman,” he said. “I love to fish fast. I love to cover water.”

Accordingly, at times during his storied career he’s struggled with embracing finesse, mostly “from a patience standpoint.” Over time, however, he learned that you can’t survive on tour these days without utilizing it. The fish are too pressured and the anglers are too educated. Rather than give up, he’s found a way to make it work KVD style: “I’ve learned to hybridize my finesse approach.”

That means he uses traditional finesse baits, but he adds a few twists that help him fish at higher speeds.

One such technique is dropshotting, but he does it with heavier weights, especially up north. “We call it bombing,” he said. He’ll find feeding fish and cast it out (as opposed to fishing vertically) to cover water. Most of the fish hit on the fall, and he rarely leaves the bait in place on the bottom for long periods of time.

One of his favorite lures for this technique is the Strike King Dream Shot, which he threads onto a No. 2 Mustad Grip Pin hook. That produces a better hookup percentage than nose-hooking the lure. Another of his dropshot favorites is the Strike King Baby Z-Too, which is made of Elaztech for durability, but has salt to neutralize some of the resulting buoyancy. “It always just hovers in the water.”

An Ocho might be a good choice when the fish are inactive, or he plans to soak the bait, but in this situation he wants something that darts, shakes and shimmies more. He’ll fish his dropshot baits on a long leader – the water may not be deep, but since he’s casting the rig his line will be at an angle.

His weights are heavy. “Half-ounce is minimum. A lot of times I’ll go to a three-quarters,” he said. That enables him to get to the bottom quickly and fire out lots more casts. “The biggest thing up here in this clear water is just getting them to see it.”

He also really likes a wacky-rigged Neko-style bait, often with a Strike King 6 1/2-inch finesse worm on the back. He said it sinks like a Texas rig or a shaky-head, but once on the lake’s bottom it has the finesse action of a wacky-rigged stickworm. In open water he prefers to use a hook without a weed guard. One other great soft-plastic option for this technique is the Strike King Supa Fry, which is super soft and compact, making it a great option for all three main species of bass, including spots.

If you want to learn some of the other secrets and details to KVD’s finesse renaissance, including the story of his involvement with the development of the Ned Rig, check out his full video from the water, available only by subscribing to The Bass University TV.