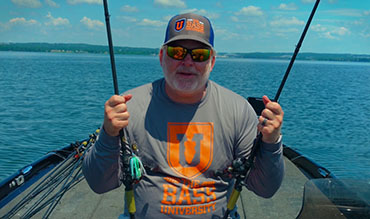 Over the past decade or so, as the vibrating jig has risen in prominence, some other lures have fallen by the wayside, chief among them one old-time favorite.

“Have you put your spinnerbaits away?” asked Bass University co-founder Pete Gluszek. “I hope not. I haven’t.”

Indeed, he said that there’s no reason to choose only one of these two “powerful tools” for fishing submerged aquatic grass. “I throw both. They both can be the best tool on any given day.”

In order to understand which one should get the nod at a particular time, it pays to know some of their differences. Gluszek knows that the oft-forgotten spinnerbait is exceptionally versatile, and he often pulls it out first when there are a lot of baitfish around. One of its biggest advantages is that it produces a lot of flash. He typically fishes it on 20-pound fluorocarbon, which allows him to snap it free cleanly from submerged aquatic vegetation, which in turn often triggers strikes. He can also pause the lure, let it flutter and attract recalcitrant biters.

A willow-leaf spinnerbait can slip through tight cover and doesn’t vibrate a huge amount, while a ChatterBait tends to be a bit more in-your-face. “It’s a big presence in the water,” Gluszek said. When it gets hung up in the grass he’ll try to work it loose, but he’s careful about how hard he pulls. “I don’t want to rip it so hard that I’m bringing it out of the strike zone of the bass,” he said.

So how do you choose which one to pick up at a particular time, or for a particular cast? Gluszek said there’s no hard-and-fast rule, so he always carries both. “You’re making a mistake by leaving it on the bank.” As a general rule, he’ll go with a spinnerbait when he wants less resistance, wants to keep the lure a little higher in the water column, and wants to move it a little bit faster. A ChatterBait, on the other hand, often excels when he wants to create a reaction strike from a fish that “absolutely will not bite.”

Lots of anglers tend to experiment with lure choice when the bite is tough to non-existent, but Gluszek goes in the opposite direction. When he’s not catching much or seeing much activity he prefers to stick with the lure choice that he has the most confidence in. Then, when he gets a bite or two, that’s when he branches out.

“When you get around some fish, that’s the time to explore,” he explained.

Even in cover other than grass, he still doesn’t necessarily prefer one of these choices over the other. He loves them both along docks, around riprap and through blowdowns.

If you want to get more insight into Gluszek's grass wizardry, including how he picks his spinnerbait and ChatterBait colors – from light to dark – check out his full video filmed on the water, available only by subscribing to The Bass University TV.