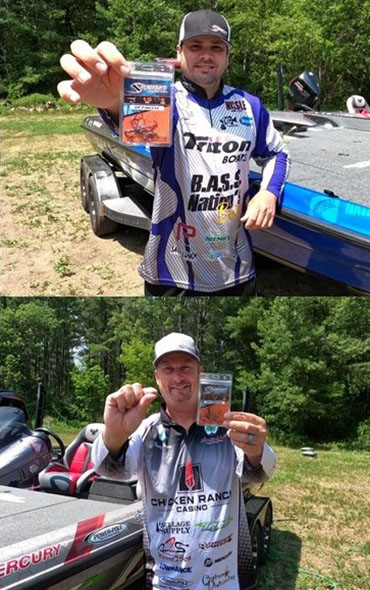 Being from central California, Pierson is familiar with Art Nubaryan and Erik Hennesay, the founders of Spearpoint, and when he received samples of the hooks, he told Spearpoint he would test them when he had a break and let them know his thoughts.

When the Lake Cayuga event was postponed, Pierson and Hollen – who travel together on the Elite Series – found themselves with time to spare in New York, so they went fishing. After one day of experiencing Spearpoint’s VGrip technology, and an increase in the amount of acrobatic smallmouth being landed, they were sold.

The result was a partnership between the company and the two anglers.

“I couldn’t believe what I was seeing,” said Pierson. “I counted how many bites I had on the GP Finesse hook, and when I got to 15 smallmouth – most of them jumping and twisting – and I had yet to lose a fish, I knew I had a performance advantage and I wanted to represent the brand.”

He also said that the hook placement and penetration was key.

“So many times, with a dropshot or wacky rig bite, the fish are barely skin-hooked, but not with these,” he reported. “Every single fish was hooked in the bony part of the nose and the point was buried; it’s exactly the way you hope they would be hooked.”

Hollen felt much the same after Pierson shared a single hook with him.

“I lost count of how many fish I caught on that one hook, but I landed all of them,” said Hollen. “What really impressed me was a big 4 1/2- to 5-pound smallmouth that I caught. The fish jumped 3 to 4 feet out of the water three times before I got it to the boat, and I landed it without a hitch. These are amazing products and I know they will help me on tour.”

Said Hennesay, Spearpoint's co-founder and marketing director: “We are excited to be working with Randy and Cody. They are a couple of talented anglers and more importantly, they are really good, humble guys who share the same love and passion of bass fishing as we do here at Spearpoint. They will be an asset for us as we grow this brand."