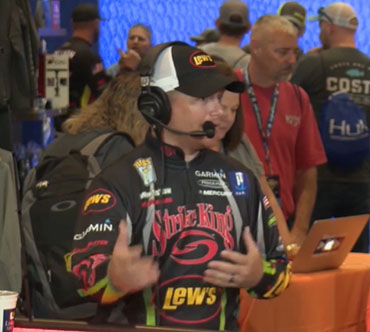 Andrew Upshaw may be most closely associated with the largemouth-laden waters of his native Texas and Oklahoma, but the two biggest wins of his career have come fishing for smallmouths. They weren’t on the Great Lakes or other traditional brown fish tournament venues, but rather on highland reservoirs – the FLW Tour event on Cherokee in April 2019 and the FLW Series Championship on Cumberland six months later.

He described the two wins as “really similar, but different.” The most critical element of his success each time was that he figured out what everyone else was doing and avoided those techniques, figuring heavy fishing pressure into the equation. “I was doing something completely different, especially at Cumberland.”

During the springtime event on Cherokee he relied on a Strike King Ned Ocho and a wacky-rigged 4-inch Ocho, pitching it into the cracks of the rocks with a spinning rod and 6-pound line. He’d noticed that other anglers were missing opportunities by paralleling the rocks. “Almost every single crack had a fish in it.” The light line gave the lure a more natural fall.

One other key was the weedless Ned head that he used, which allowed him to target cover where others would not dare through the highly-effective bait.

“I like to throw my Ned Rig up where nobody else throws it,” he said. “I like to pitch it up in cover and around places where you’re going to snag up. The weedless head works 10 times better than anything I’ve ever used.”

At Cumberland, he tried to make typical fall patterns work. Those might involve fishing topwaters and spinnerbaits in the backs of pockets as the bass followed the shad. Every time he went into one of those obvious pockets, however, he’d find multiple boats already in there fishing, or just leaving. That led him to look elsewhere.

“I rolled out to the main lake.”

Out there he flipped a jig on places where channel swings butted up against bluff walls. He’d be sitting in 30 to 80 feet of water, but the fish came much shallower than that. On the first day, he was able to pitch a 3/8-ounce Strike King Bitsy Flip jig to the bank, and the fish would hit it almost immediately. By the end of the tournament, it had gotten significantly colder and the fish had shifted out deeper. He switched to a 1/2-ounce Bitsy Flip, and he’d hop it down the stairstep structure until he got bit, usually in 8 to 10 feet of water. All 15 fish that he weighed in were smallmouths.

One key to this technique was to use the right tackle for the smaller lure and finicky fish. He fished a 7’2” medium-heavy fast-action rod with 15-pound line, just enough meat to get a solid hookset. A traditional 7’6” flipping stick with 25-pound fluorocarbon would have been overkill and would have reduced his overall effectiveness.

“You don’t want to overpower the bait.”

If you want to learn some of the other secrets of how Upshaw targets smallmouths on highland reservoirs, including the three key jig trailers that he used at Cumberland, check out his full video filmed at this year’s Bassmaster Classic, available only by subscribing to The Bass University TV.