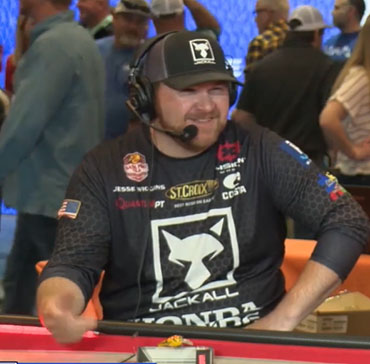 In his short career on tour, Jesse Wiggins has established himself as a consistent winner and a versatile angler, but much of his success is owed to two specialties developed at home in Alabama.

“That was the deal growing up on Smith Lake,” he said. “You either fish a shaky-head in the ditches or out deep in brush, or you’re on the bank where the water’s dirty throwing a crankbait.”

While the shaky-head is often thought of as a small-fish or numbers technique, Wiggins believes that’s not true. “People always thought you just caught little bitty ones, but you don’t if you do it right,” he said. “I’m sitting right here with y’all because of that bait,” he said to the Bass University audience.

It’s not geographically limited, either. “I won a tournament in Florida with it,” he recalled.

As opposed to a Texas Rig, which tends to fall straight, a shaky-head spirals or glides. That’s why so many fish eat it on the fall, especially when you’re around large numbers of bass. But when they’re not super-aggressive, he believes that “It has to be on the bottom for it to work.” He’ll leave the bail open on his spinning reel until he’s certain that the bait is on the bottom. Otherwise you may sacrifice up to a third of the distance of your cast due to the pendulum effect.

The other big mistake that people make is to fish it too fast. That’s why he’s historically outfished his co-anglers and fishing partners – they can’t slow down.

He accomplishes the combination of sloth and lure action using a technique that he calls “shaking the slack,” and explained that he makes that happen by shaking the whole time, but not staying in direct contact with his worm. Then he’ll move it a little bit forward and do the whole thing over again.

While the shaky-head has long been his bread and butter, he loves the mano a mano feeling of chasing down bass with a crankbait.

“I just feel like if I bang that thing off enough trees or rocks one’s going to eat it eventually,” he said.

He worked with his sponsor Jackall as they brought back their previously-discontinued MC60 crankbait, a 6-foot diver. Specifically, Wiggins helped the Japanese lure-maker to develop their craw patterns. If the water’s dingy, he almost always prefers a craw-colored crankbait over a shad version, even in the fall when bass are chasing baitfish. The only time he’s likely to stray from that preference is when there’s a hardcore shad spawn going on. Accordingly, he’s very proud of and very reliant upon their molting craw and dark craw color patterns.

If you want more information about how Wiggins utilizes these two distinct lure classes to earn check after check, including his seasonal keys to shallow-cranking success, check out his full video filmed at this year’s Bassmaster Classic, available only by subscribing to The Bass University TV.