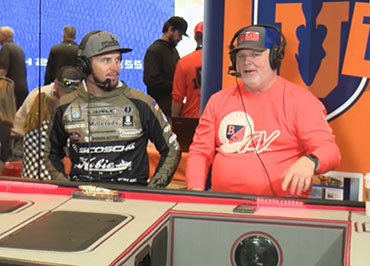 Native Australian and Bassmaster Elite Series champion Carl Jocumsen has made no secret over the years of his love of glide baits. He’s ridden them to success, and at times he’s stayed with them a bit too long, but he knows that when conditions are right this technique is often the best way to build a big bag in a hurry. He’s worked with his sponsor Molix to build a glider that meets his specific needs. That includes swiveling hooks and picture-perfect colors, but the most important thing is the action.

“It has to do everything perfect,” he said. “If it doesn’t, it’s just too hard to get bites on it.” He said that his signature bait has a “suspending style that makes fish commit to it.”

Part of learning to love the glider is getting over some of the misconceptions about this style of lure. It’s not just a West Coast thing, and it does not only excel where fish 10 pounds and up reside.

“The East is the hidden gem for it because they haven’t seen it,” he explained.

Jocumsen admitted that he sometimes pushes the glider too hard, and has therefore learned to use it as a supplement to his overall tournament game, but he also believes that any angler who doesn’t regularly have it on his or her deck is leaving fish on the table. Accordingly, he’s developed a system where he uses the glider under three distinct scenarios.

The first, and he believes best, is to find his fish using another lure. On Lake Champlain, for instance, he might catch them on a jerkbait or squarebill and get up to a solid weight of 16 to 18 pounds. Instead of continuing to beat up those same fish with the same lure, he’ll put everything but the glider away and look for a couple of bonus fish to cull up substantially. By already having the solid bag in the livewell, he’ll fish relaxed.

The second strategy is to put the single glide bait rod on the deck and go for broke, but he admitted “it’s rare” for him to do that.

The third is a means of saving himself on tournament day. On several occasions he’s found himself headed to weigh-in with a small or average limit, knowing that a single 5-pounder could get him paid, and stopped to throw the glider. It can be on spots where dozens of boats have already stopped and fished, but something about that big bait often produces results when others won’t.

Of course, there are also misconceptions about when and where to use it. He doesn’t need ultra-clear water to make things happen. “I want that water color to be a little bit off,” Jocumsen said. Two to three feet of visibility is ideal. It’s also not jut about longs casts and covering water. He loves to fish the glider around laydowns and docks, in tight spots where fish have never seen it.

If you want to get more information about how Jocumsen utilizes glide baits as a tournament tool, including his thoughts on using a flipping stick, high-speed reel and braid for this technique (hint: don’t do it!), check out his full video filmed at the Bassmaster Classic, available only by subscribing to The Bass University TV.