Hightower on top at Arkansas River 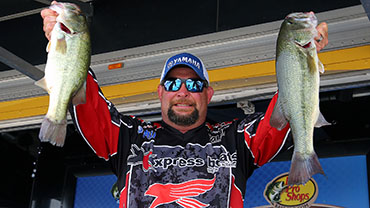 An early morning delay forced Dale Hightower to scrap his initial game plan, but the Bassmaster Elite Series pro regrouped and put together a productive Plan B that helped him take the day-2 lead at the Arkansas River Bassmaster Central Open.

“I went down to the lower pool (Kerr Lake) yesterday, but I didn’t go down there today,” Hightower said. “I got down there and there was a barge in the lock and they were turning everybody around; it didn’t look like anybody was going to get to lock.

“I just said to myself ‘It’s out for me,’ because I had an early flight and I only had about 2 1/2 to 3 hours to fish to begin with. I just got it out of my head and just went fishing up here. I’m lucky to have what I had.”

Hightower caught his fish flipping. He did the same yesterday, but today’s bites required him to replace the creature bait he used on day 1 in Kerr with more of a finesse flipping bait.

“I just think it was the pressure on the fish,” he said. “With [a lot of] people flipping and pitching and casting at them, there’s a lot of pressure on them.”

Noting that he targeted wood cover, Hightower said he was poking back into the treacherously shallow areas for which his aluminum boat is made.

“My Xpress boat always plays a role for me,” Hightower said. “I fish shallow and that’s just how I do it. That boat gets me there, gets me over stumps and logs and stuff that I couldn’t do [in a fiberglass boat], so it has definitely played a role this week.

“I know there’s a grass bite, but after coming back from the Elite Series event on Lake Eufaula last week, I didn’t have time to find it. So, I just did what I always do here. I live about an hour and 15 minutes away, so I’m used to fishing this place and I always fish wood.”

Hightower confined himself to one stretch of bank about a quarter-mile long. Making methodical passes up and down the area enabled him to pick off a fish or two each time.

“I kinda had some sweet spots, but it was just back and forth,” he said. “Around 10:30 or 11 o’clock I had some flurries. I didn’t have a fish for a long time this morning; it took me until 10 o’clock to get my first one, but when we got rolling, we kept going.

“I think I just settled down and fished. I realized what was dealt to me and I was pretty upset about this morning. But you can get upset or make lemonade out of lemons, and that’s what we did today.”

John Garrett of Union City, Tenn., is in 2nd place with 26-12. After sharing 4th place with Hightower on day 1, Garrett said his day took on a different complexion.

“Me and my good friend Cody Huff had a whole area to ourselves yesterday and the fish were easy to catch; today, we had a lot of boat pressure,” Garrett said. “The water came up and spread the fish up a good bit. I struggled all day. I caught my fifth keeper at 1:30.”

Garrett caught his bass by flipping a Strike King Rage Bug and cranking a Strike King 1.5 squarebill. Focusing on shallow wood, he found an early morning bite that produced a pair of 3-pounders on his first three flips, then faced a three-hour drought before adding two more on the squarebill and ended with his late-day limit maker.

Huff trails Garrett by 8 ounces with a 3rd-place total of 26-04. Hailing from Ava, Mo., the 2019 Bassmaster College Series bracket champion stayed in local waters and concentrated on shallow hard-cover targets where he found a mix of fry-guarders and others settled into summer patterns.

“I practiced in Kerr for six days and came up here in the last half of my final practice day and I was getting more bites than I did in Kerr,” Huff said. “With the lock situation, only being able to fish for a couple of hours down there, I knew I wasn’t on them good enough to catch them in two hours.

“I liked the idea of being able to stay up here, grind and actually be able to fish for two hours. I caught them flipping and on a ChatterBait, spinnerbait and squarebill. I’m just junk fishing; catching them on whatever I come to.”

Scott Pellegrin of Chippewa Falls, Wisc., is in the lead for big-bass honors with his 5-13 largemouth.