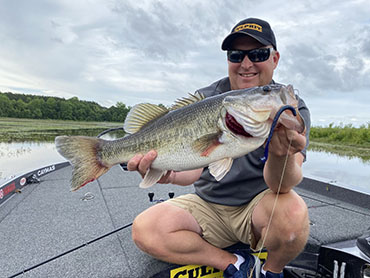 This week’s show was centered directly on what should have been a major spawning event. It was shot in mid April with warm air and water in the mid 60s, but the fish were only mildly on beds. We'd had a warm March and they must have spawned then.

I went about the day like I would in any clear-ish water lake with a floating Culprit T-Rex worm covering water, expecting to find lots of beds. I did not find a lot, but I found a few. Most fish where cruising in very shallow water, yet very hard to see. They blend in so well in inches of water up in the shallows and under bushes.

The theme of the show was to not lock down and fish for every bedding bass you see in the spring. That is how you ensure you will only catch a handful of fish because you spend so much time on one fish at a time. Some days, certainly that is the best and only way to catch them, but in my experience, if you keep blind-casting or making a "one cast” to a bed from a distance, you will come across many more fish and have a chance at big numbers and size on most days. That first surprise cast from a distance, before the fish knows you're there, is the best chance you have.

On this day, it was case in point. There were empty beds everywhere, so to slowly go through and look at all of them would have wasted a whole day.

My approach was to fish fast with a Culprit T-Rex worm and a traditional hollow frog, but having a 7.5-inch Culprit worm and Incredi-Craw at the ready. So I would just go fast down the bank with the two search baits and then stop and cast from a distance with the Original worm or flip the craw into nasty stuff if I happened upon the right spot.

I had some messages about rigging the T-Rex and which hooks I was using because I didn’t cover that during the show. On a T-Rex, which is a 6’-inch worm that I fish “floating” or with no weight, I use a 4/0 offset hook and leave a little bend in it so that it “walks” underwater. It's a straight worm, so to make the bend, just insert the hook back into the worm short when you are Texas rigging it. In other words, you would normally want any other worm to fish straight, but with this you are purposely putting the bend in it by inserting the hook point short on the body of the worm.

As the day went on my focus narrowed to the far backs of the creeks. Fish were completely done spawning there and eating or guarding fry.

With hindsight being 20-20, and watching the show again this morning it hit me what I should have done all day – buzz a worm. With most fish in the immediate post spawn and very reflexive in how they were biting, they would have ate it and ate it big.

If I would have tied on a Culprit Fast Vibe, which is a worm designed to speed across the surface with the tail buzzing (among a host of other uses). I would have had my bait in the strike zone even more often, with an even faster method for covering water – especially the clear water I was in.

Imagine if I would have paralleled those banks with the Fast Vibe and then fan-casted the backs with it. I’m literally kicking myself now. The Culprit Fast Vibe is the ultimate bait for covering water in a finesse way, but fast. Not as bulky as a buzzbait, but just as fast, and you can stop it and get bites as well.

The limiting factor on the buzz worm is water clarity – it needs to be fairly clear. I rig the Fast Vibe with a 1/32-ounce weight for a little extra ease of casting and use 50-pound Yo-Zuri Braid for it and a 4/0 offset hook with a Falcon Expert Amistad rod, which is a 7’3’’ heavy-action but with enough tip to cast the light rig.

How could I not have thought about the Fast Vibe? I guess that's why I do these post-show articles – to help BassFans and myself learn from them.

I had a pretty good day, catching about 20 bass of decent size, but I think I could have doubled it with the Fast Vibe – maybe more.

Like any day of fishing, you have to figure them out. I didn’t know what stage the fish were in early enough and I didn’t adapt fast enough.