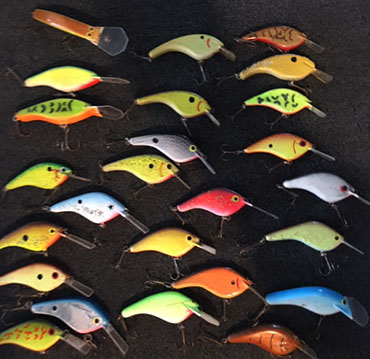 "This is more than one lure, but sentimental value is attached to every one of them. I started tournament bass fishing in the early 1970s in east Tennessee. Back then, the crankbait was king, especially the balsa homemade variety. Many anglers attempted to carve the baits and some were definitely fish-catchers.

"My buddy’s dad Jim was one of those guys. He had lure-making down to a science. He had templates for the balsa, jigs to form the wire, lead weights made from melted tire balancers. And a virtual paint shop to doll these wooden beauties up. He passed away 20 years ago and his collection stayed in several tackle boxes along with many store-bought models. Recently, his son Tom sent them to me.

"Even though I fish in central Florida, where grass mats hinder crankbaits, I was touched to own these masterpieces. My Florida buddies tell me to put them on eBay. Nope. Jim would have wanted them to be fished. I’m giving them away to my friends, along with this story, not taking a dime.

"However, each summer we travel to Colorado to fly-fish. Jim’s son joins us there. One of the recipients of the” homemades,” who works for a rod component company, is custom-wrapping an 8-foot, 3-weight fly rod for Tom. The wooden reel handle will be crafted from a Jack Daniels whiskey barrel stave, with a letter of authenticity, along with his name in gold on the rod. I think he will be surprised when I present it to him this August!"

Do you own a lure that carries a great deal of sentimental value? If so, please snap a photo of it, write up a few paragraphs and send us an email at editorial@bassfan.com.