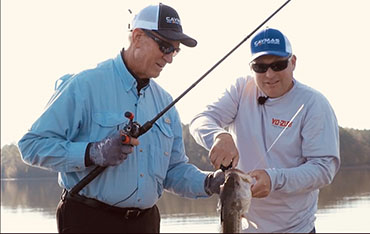 Back in October I drove out to Tennessee, to the same location as the old Triton Boats factory where I'd been many times before early in my career, to pick up my new boat for the season.

Only this time it wasn’t a Triton. The man sitting behind the desk and smiling had a Caymas Boats hat on and greeted me with a warm smile and a handshake. I hadn't seen him in some time and he still looked the same, had the same deep voice, same enthusiasm for the sport of fishing as I had remembered. That man is Earl Bentz, the legendary boat-builder who has started several successful boat companies over his career. In the unlikely event you haven’t heard, he's founded a new boat company called Caymas, offering a full line of fresh- and saltwater boats.

Almost immediately he started to tell me stories about Guy Eaker. We all know the Hall of Fame angler and all-around good guy who has never met a stranger. "I want him to be on your show and I guarantee you it will be your best show," Earl said. I immediately agreed and said I was looking forward to it. I was honestly a bit nervous – Guy was just about to turn 80 and I was wondering if he could keep up with a grueling 12-hour video shoot.

I’ve known Guy since way back, but had never shared a boat with him. I’ve worked boat shows with him and fished countless tournaments against him.

So the day came, I met him before dawn at his hotel, he came outside ready to roll and said he had been up an hour already, which somehow didn’t surprise me. I said we have to wheel into Bojangles (since Guy is sponsored by them). After getting a biscuit and cinnamon twists and a large half-and-half tea, I was feeling good and ready to go, too.

Guy is one of those special people who's always very loyal to his friends and sponsors. Earl could tell him he had a Caymas boat promotion on the moon and Guy would be down in Florida hopping on a shuttle!

We were at the lake before dawn, getting the camera equipment set up and mic packs on.

We fished for about an hour with no bites and I was a little nervous, but Guy was not at all fazed. Ever optimistic, he assured me we would catch some fish despite not ever having fished the lake we were at. I tend to want to catch seven fish on my first cast, but Guy was cool and collected. It was the fall season and we all know that time can be a little rough for fishing with the turnover and numerous cold fronts, as well as fish having been educated by other fishermen all year. Guy was busy telling me stories and it made the day go by incredibly fast. We shared tales of all kinds of things we had experienced while fishing B.A.S.S. events over the years.

As the sun came up and started warming the water, we started getting bites, slow and steady, on crankbaits. I was fishing Yo-Zuri square-bill and a Hardcore Shad and Guy was using a Berkley flat-sided bait. We ended up catching a decent number of fish off one little section of an old ditch lined with stumps. The lesson to be learned from the day was to stick with an area if it has all the right ingredients. Approaching the cover from different angles with multiple casts and different-action crankbaits was key in the fall period we were fishing.

Guy never let up all day, matching me cast for cast, and he only took one 10-minute break to eat a sandwich. He was full of energy and I was amazed. No wonder he is such a great angler with such a long career. I asked him how he stayed in such good condition, as he's tall and not one bit out of shape. He said he gets up every morning and exercises and eats very healthy. That plays a big part, but I was thinking it was his optimistic outlook on life more than anything and his true love for fishing – something all BassFans can relate to.

Guy is kind, loyal, optimistic, and obviously knows how to handle a rod and reel. What I learned from him was not a secret technique or any inside information, it was about character.

Thank you, Guy, for sharing the boat with me, and hopefully we can do it again next season, when I will surely catch more than you!