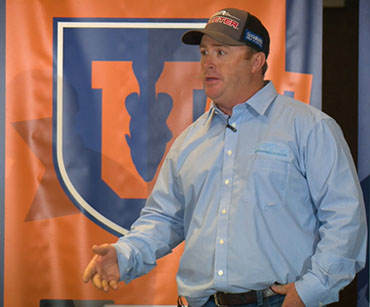 Scott Canterbury’s rise to the 2019 Elite Series Angler of the Year title was the culmination of a decade of trying, with some near-misses – like two Forrest Wood Cup runner-up finishes – along the way. When he finally took home the big hardware, he credited the system he’s developed since he first started fishing as putting in place the building blocks for success.

That starts as soon as the schedule is announced. “I used to study paper maps all of the time,” he said. Now, with an iPad, Google Earth and various map chips, he needs the paper versions less and less. He’s also dedicated to watching any and all YouTube videos of previous events on those bodies of water to see the ranges of likely outcomes and top patterns.

“When we get to practice, you’re trying to break it down a little more,” he explained. He’s not necessarily looking for specific spots, because major tournaments are rarely won on the same spot twice, but he does want to know which areas historically produce the best weights under varying conditions.

While he was thrilled to win AOY, there’s one time he doesn’t mind finishing out of the top spot.

“I never win practice,” he said. His goal during the three days on the tournament venue is to cover water, but be thorough. He wants to develop confidence in a few areas. That typically means breaking down a fishery into three sections and dissecting each one on a day of practice. When the lake is small enough, he’ll divide it in half, hit each of those halves on one day of practice, and then go back to the one that looks most promising on day 3.

“In practice, you don’t want to educate them,” he admonished. That means setting the hook on very few bass, and when possible just putting a weight and a screw lock into a soft plastic to avoid “sore-mouthing” them.

He’s also trying to figure out not where the fish are today, but rather where they’ll be once the tournament starts.

“You have to stay ahead of the fish,” he said. “I always think about the first day of the tournament as the best day of practice, except I’m actually leaning on them.”

The key to last year’s success was his spot-on decision-making. There were nine tournaments, five of them on bodies of water he’d never fished. Even when he’d been to one before, he tried to keep an open mind. For example, at the St. Johns River he leaned on a lipless crankbait pattern on the first day, which had him in the middle of the pack. On day 2, as blast-off was starting, he scratched everything, rigged up his flipping sticks, and vaulted toward the top of the standings, ultimately finishing 9th. “It’s a confidence thing,” he said about making good decisions in the heat of the moment.

Ultimately, he aims never to be satisfied: “If you reach every goal you ever set, you didn’t set them high enough, in my opinion.”

If you want to learn some of the other secrets that fueled Canterbury’s magical AOY run, including a day-by-day recap of last year’s Elite Series season, check out his full video, available only by subscribing to The Bass University TV.