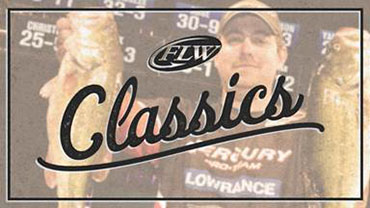 With no tournament action taking place and most people staying around their homes to help slow the spread of COVID-19, FLW figured it was the perfect time to dig into the archives for some old tournament footage to post to the FLW YouTube channel.

The first batch of classic FLW TV shows come from 2006 and 2011, with more shows scheduled to be posted this week. Shows cover everything from John Cox’s first FLW Tour win to a Tour event on Okeechobee in which three pros crossed the century mark for total weight and the 2nd annual College Fishing National Championship, which saw the University of Florida repeat as champions.

> 2006 FLW Tour on Lake Okeechobee – After winning the Angler of the Year title in his rookie season in 2004, Shinichi Fukae could only scrape up one top-20 finish in 2005. But, in a post-hurricane 2006 season opener on Lake Okeechobee, Fukae started his third year on Tour in style.

> 2006 FLW Tour on Lake Murray – The second stop of the 2006 FLW Tour season was a winter showdown of epic proportions at Lake Murray. Anthony Gagliardi was the hometown favorite, but the bass were the stars. On the final day, both Gagliardi and Tim Carroll brought more than 28 pounds to the scale.

> 2011 FLW Tour Open on Lake Okeechobee – This was an epic Florida smash-fest. Three pros totaled more than 100 pounds apiece, and the kickoff to the season saw 29 bags of more than 25 pounds weighed throughout the course of the event.

> 2011 FLW Tour on Pickwick Lake – A true ledge-fishing clinic that took place before the whole world knew the ins and outs of Tennessee River offshore fishing. It was also the final tournament of the season and David Dudley clinched the second of his four Angler of the Year titles.

> 2011 FLW Tour on the Red River - It was a coming-out party of sorts for John Cox and his shallow-water style. Held in May during tough post-spawn conditions, the event’s top 10 featured the likes of Mark Rose, David Dudley, Gary Yamamoto and Brent Ehrler.

All of the shows can be found on the FLW Classics playlist on YouTube.