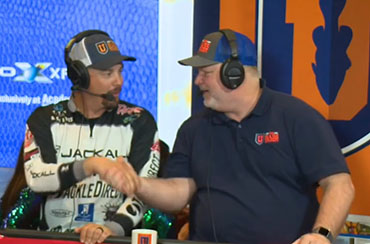 How does Lake Guntersville host so many tournaments, from Bassmaster Classics to BFLs to local club events, and keep on pushing out monster stringers? It’s because of the grass ecosystem that maintains a healthy balance of species, said FLW Pro Circuit angler Alex Davis, and also because the excellence is not limited to one section of the lake.

“You can put in at any ramp on the lake,” he explained. “The whole thing is good.” He’s got 2,500 waypoints to prove it, and said the only limiting factor in where you launch should be how you want to fish. “Put your trolling motor down and learn. Don’t run around.”

In the springtime it produces because the fish don’t behave like Florida bass – they bite when it gets cold. In fact, Davis came in 10th in a BFL a few years back in which it was 6 degrees at take-off.

We all saw Hank Cherry win the recent Classic on a jerkbait on a well-known piece of structure, and he deserved every bit of the $300,000 top prize, but the magic of Guntersville is that it’s a great pattern lake. Find something working somewhere and it’s often easy to replicate it. In the springtime, Davis relies on three key lures: A Jackall MC60 medium-running crankbait, a Jackall TN70 lipless crank and a Jackall Break Blade vibrating jig.

The lipless used to be his favorite, and it’s still exceptionally popular, but Davis said, “It’s not my preferred anymore.” That’s because the once-abundant hydrilla has been replaced. “Now we have eelgrass. That doesn’t really change where you fish. It changes the whats.” The eelgrass forms a carpet, and that makes it more efficient to fish with single-hooked lures.

Despite that caveat, Davis does love the TN70, which gets a little deeper than the average lipless bait. He learned about it from fellow Shimano pro Jared Lintner and has experienced success with it around the county.

The spinnerbait used to be the shallow-water king, especially for a guide nicknamed “the Spinnerbait Kid,” but like many others Davis has fallen in love with the bladed jig. “This bait can imitate any kind of forage and it’s easy to fish,” he said. With a white skirt and trailer, it’s a shad. With green pumpkin components, it’s a bluegill. Put on a red skirt and trailer and you have a crawfish imitator. Once the water temperature goes above 64 degrees, he believes that a swim jig is often better, but until then he goes with the Break Blade.

He throws it on 15-pound fluorocarbon despite the prevailing wisdom that 20-pound is better, because the lighter line gets the bait deeper and still rarely breaks. He pairs it with a medium-heavy fiberglass rod. That’s a tip he learned from listening to Brett Hite several years ago after nearly giving up on this style of lure because he lost so many fish.

“I’m not a dummy,” he said of his willingness to change. “We’re not here to lose fish.”

If you want to learn some of the other secrets that helped Davis master the Big G, check out his full video, filmed at the Bassmaster Classic in Birmingham, available only by subscribing to The Bass University TV.