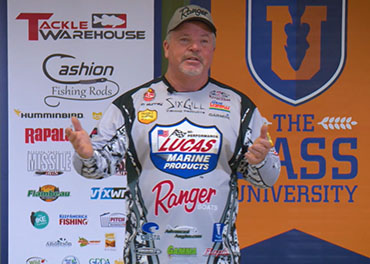 Veteran Bass Pro Tour angler John Murray has won 31 boats in his storied career, at least 8 or 10 of them fishing a jerkbait when no one else was doing so. He said that’s the biggest misconception about jerkbaits, that they’re merely seasonal tools. Today many anglers will only use them in colder temperatures. That’s a switch, said Murray, who noted that “When I started fishing, nobody fished jerkbaits in cold weather.”

“It’s a year-round tool,” he explained, and noted that they’re often at their best when you swear the lake is dead. “It’s always a bait that’s on your rod, somewhere.”

He keeps a variety of brands and sizes with him, everything from 2 1/2-inch models up to massive 7-inchers. He’ll pick them based on the size of the fish he’s chasing and the type of forage they’re eating. “I literally have five boxes full of jerkbaits … every color, every size,” he explained, and yet he buys more every year.

No matter which one he’s using, he makes sure that it has “hooks that hold.” He’ll rarely employ three round-bend trebles, mixing in an EWG or two as appropriate, and he noted that some experienced anglers use quads on the first two hook hangers or on the last one. He also frequently utilizes feathered trebles on the rear, especially on smaller jerkbaits. Red trebles up front and oval split rings are also a key part of his tool box.

If it’s a 50/50 choice whether to use a hard jerkbait or a soft jerkbait, he’ll usually choose the former because they hook more fish. The latter might get a higher percentage of hookups, but getting the fish pinned is the name of the game. Nevertheless, soft jerks like the Super Fluke are also a part of his arsenal, especially where weedlessness is important. He puts a barrel swivel ahead of the hook to reduce line twist, but otherwise doesn’t add weight most of the time. When not fishing a tournament, he likes the two-fluke Donkey Rig. “That’s money if they’re chasing bait.” While he typically aims to match the hatch, he noted that in the post-spawn, bubblegum is often the deadliest color of them all.

More than color, however, cadence is king.

“I’ll take that every day over a color or a bait,” he said. He also said that “If you don’t get the right cadence, you’re not going to catch a fish.”

The keys are to keep an open mind, and if you’re fishing with a partner, try different retrieves to keep the fish honest. Normally it’s a one-two-pause, but he’s also fished situations where nothing but long, long pauses could garner strikes. That’s a tough way to practice “because you can’t cover enough ground,” but if you find a few it’s an effective way to milk an area. On the flip side, sometimes with smallmouths “to catch them seriously you’ve got to hurt yourself” by retrieving the lures are warp speed.

If you want to learn some of the other secrets to Murray’s long-term jerkbait success, including how his tackle differs from the standard Tennessee setup and how he figured out that a “Shad Rap is a better jerkbait than a crankbait,” check out his full video, available only by subscribing to The Bass University TV.