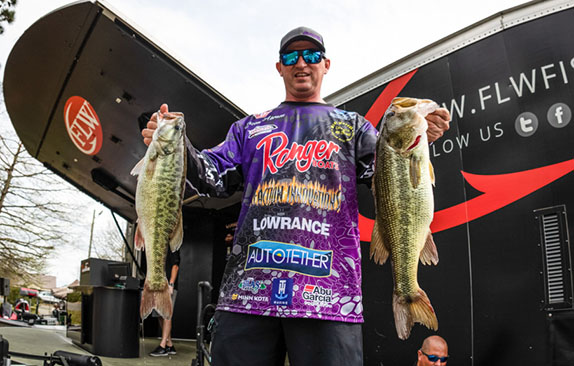 Jason Abram caught a 17-10 stringer to move to the top of the standings at the Lake Martin FLW Pro Circuit in Alabama with a two-day total of 29-00.

“I’m fishing mid-lake, running a pattern,” said Abram, who's in his 11th season in FLW’s top-level circuit. “I was running and gunning – I hit around 30 stops today.

“I started out in the morning catching spotted bass – I probably caught around 30 of them and my limit weighed around 7 pounds,” Abram continued. “I had a key bite around 9 a.m. that clued me in and showed me something that I hadn’t seen all week. It was the first fish that I had caught like that, and it was a good one. I ended up culling every one of those spots out and managed to bring one big spot and four largemouth to the scale.”

Although Abram remained tight-lipped about the specific details of his pattern, he said that he was fishing “really shallow” and throwing just two baits – both made by Reaction Innovations.

“I’m not sight-fishing like most of the guys are,” Abram said. “I need the sun, so the cloud cover being forecast tomorrow will probably hurt me significantly. I’ll catch some spots in the morning and hopefully the sun will show its head. If not, I’ll have to scramble.”

Here's a look at the top 10 at the midway point: