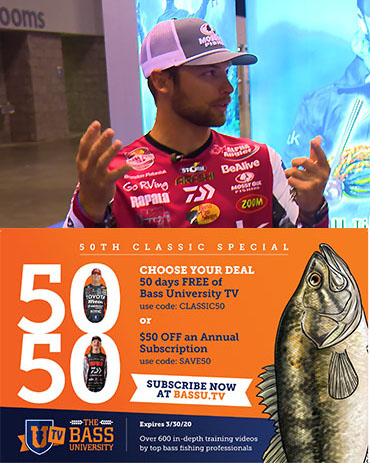 No matter where you fish from coast to coast, if you don’t rotate a football jig into your arsenal on a regular basis, you’re leaving fish behind.

“You have to have it,” said former Elite Series Angler of the Year Brandon Palaniuk. Just using a football jig on hard cover and structure is a good start, but having the right one makes a huge difference, and that’s why he worked with Molix to develop the GT (“Golden Team”) Football Jig.

“A lot of the things that I wanted to build into it were to get that head-forward design, where you can get that hook to stand up, and the way you do that is by getting all the weight forward in the head of the bait.”

With the tail-up posture, it resembles a lot of different forage. First and foremost, it looks like a crawdad in a defensive position, but if bass are chewing on bluegill or shad it can also mimic feeding baitfish.

Molix built a double-barbed lightweight keeper onto the hook to keep your trailer in place while limiting the amount of weight on the shaft, and they paired it with a heavy-duty VMC hook. The jig also has to come through cover exceptionally well. That’s why they added both a substantial brush guard and a wide head that rolls side-to-side when retrieved.

“As soon as you pop your bait out of the cover, that’s when most of the strikes come,” he said. That’s why he goes on point when he’s in the thick stuff, ready to react when his jig pops free. Most presentations start off with a long cast toward the key structural elements, and perhaps 75 percent of the time “you drag it along the bottom.” That’s the most common way to fish it, but it’s not the only way. “There’s so many things you can do with it,” he advised. For example, it can be stroked, as is common on the TVA river ledges, with tremendous results.

Ideally, when he’s ready to get the strike, his rod will be off to the side to ensure an efficient hook set. “I like to do a side sweep with it.”

No matter how he’s fishing it, he typically uses a 7’3” Alpha Angler rod paired with a Daiwa Steez baitcasting reel (7.1:1 gear ratio). He prefers Seaguar fluorocarbon and uses 15-pound much of the time, although he’ll go down to 12 or up to 20 depending on conditions like depth, wind, water clarity and the density of the cover.

If you want to get more insight into how Palaniuk chooses and fishes the versatile football jig, check out his video, filmed at ICAST with Bass U founder Mike Iaconelli and available only by subscribing to The Bass University TV.