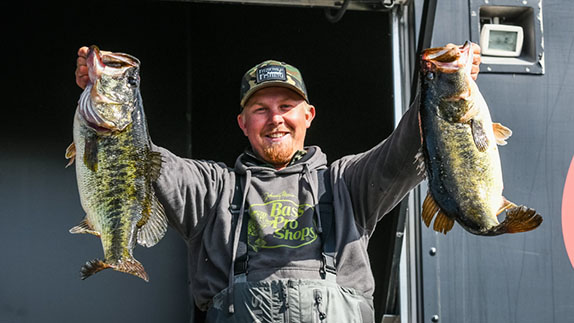 Local pro angler Laramy Strickland of Bushnell, Fla. caught a 31-06 stringer to vault to the top of the leaderboard at the FLW Pro Circuit event at the Harris Chain of Lakes. His two-day total of 46-00 gave him a 4-03 lead over 2nd-place Jimmy Washam of Covington, Tenn. (41-13) and more than a 6 1/2-pound advantage over 3rd-place Hunter Freeman of Monroe, La. (39-06).

The tournament, originally scheduled for four days, was shortened to three after strong winds forced a postponement of competition on Friday. With a top prize of up to $135,000 on the line, the full field of 154 anglers competed on Thursday and Saturday and now only the top 30 anglers advance to Sunday's final round.

While a 4-plus-pound lead would be very substantial on most bodies of water, the giant bass that lurk at the Harris Chain mean that Strickland’s lead is by no means safe and many anglers remain in contention to take home the top prize. However, what is perhaps most interesting about Strickland’s magical day on Saturday is that the Florida pro thinks he might be able to duplicate it on Sunday.

“On Thursday I only caught 14 pounds, but I had three swimmers and I lost two or three giants,” said Strickland, a rookie who is fishing his second tournament at FLW’s top level. “Today, I caught my giants and was out of there by 10 (a.m.). I really laid off my fish – there is so much there that I haven’t fished yet."

His stringer included a 9-04 specimen that took big-bass honors.

“I’m really excited because I know what’s happening and I believe it’s going to hold for at least another day. We’re just going to go fishing tomorrow and see if I can catch a 'dirty 30' again.”

Although Strickland was tight-lipped about his specific details and presentations, he did mention that he has caught all of his fish this week – except one that he weighed today – on just one bait. He said he was flipping and casting.

“I thought I would maybe catch around 20 pounds today, but the big 'uns bit for me,” Strickland said. “I caught six fish today and left it. Just fishing around I caught a couple of little dinks, but I never caught anything else that could help.

“Things are lining up to get good again and I think tomorrow I’m going to either hero or zero. I’m just going to go fishing and do what I know how to do to catch them.”

Here are the totals for the top 10"