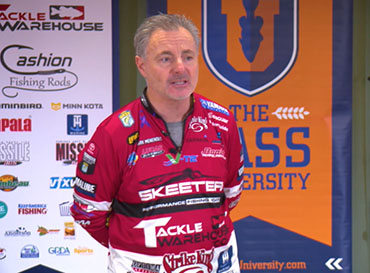 While many other pros are at home in front of the fireplace, Mark Menendez puts on weather-appropriate gear and braves the cold for what he knows is some of the best bass fishing of the year. It’s a time when fish are concentrated, and if you know where to look you can load the boat in a hurry.

He typically starts in the lower end of the lake, where water is clearest, and then seeks out vertical structure with access to both deep water and shallow flats. “They move vertically in the water column,” he said, adding that “we can eliminate a huge part of your reservoir or lake.”

Some wintertime anglers may wait a few hours after daylight to get their start, but the veteran Kentucky pro believes that’s a mistake “The best time to be there is at the crack of dawn-thirty,” he said. “First thing in the morning they’re active.” After that, they tend to back off and suspend. When that happens, they tend to migrate to a uniform depth, choosing a particular contact point for congregation across the lake. “I don’t care if it’s 20 feet on top and it falls to 100, or it’s 40 feet on top and it falls to 200, they’re suspended at 10, 20 or 40.”

Current positions the fish on the structure, and if you find the right down-current breaks, “you can catch them until you’re blue in the face.”

One of his key tools is a suspending jerkbait, and he prefers chrome when it’s sunny because it has more flash, and something with white sides when it’s overcast. He’s also a big fan of an old-school grub, with which he can control the rate of fall. Lately he’s come to rely on the Strike King Rage Grub, and he’ll alter the flange on the tail to modify the fall rate. His favorite color is pearl chartreuse, but pearl white also gets some time in the rotation. He fishes both on 8-pound test Seaguar fluorocarbon, letting the lure fall to the desired depth and then reeling it back to the boat steadily at that level.

A spoon is another of his winter favorites, but typically not the massive flutter spoons that dominate Kentucky Lake in the summertime, which he characterized as a little bit too overpowering for winter. A traditional jigging spoon can be deadly, and while 3/4-ounce is the most popular size, he relies on a 1/2-ounce more frequently, silver when it’s sunny and gold or white when it’s overcast. He utilizes the spoon in “drains” in the middle of pockets. “Get in the bottom of the drain,” he advised. “It doesn’t have to be a big creek.” While an aggressive stroking of the spoon is often best in the summer, in the wintertime he takes a more subtle approach. He lifts the spoon a little and then lets it flutter back on a semi-slack line.

If you want more insight into how Menendez catches massive limits when the temperatures are chilly, including his thoughts on the Alabama Rig and how he uses a spinnerbait to target bigger-than-average bass, check out his video, available only by subscribing to The Bass University TV.