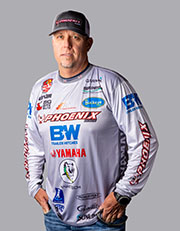 At about 9:30 a.m., Lane was fishing when he saw a boat that he estimated at 150 yards away veer toward him traveling at a relatively high speed. When it closed to about 100 yards, he wondered whether the driver's intent was to pass between him and the vegetation he was casting to.

When it was 50 yards away, he came to the terrifying realization that the driver had somehow failed to see him.

"My first reaction was to kind of hunker down, but it was coming straight for me at the trolling motor at about 30 yards," Lane said Thursday night. "I ran and jumped to the back deck, and when it closed half that distance, I think that's when he saw me. He hooked his boat to try to miss mine, but then it was coming straight at me on the back deck. I jumped back to the front and I guess it was in mid-leap that they made impact.

"It threw so much water that it felt like a big wave crashing on me. It knocked me to my knees and I was halfway out of the boat, but I was able to hold on and pull myself back in."

He said the other boat, a 20-foot Triton, was occupied by an older couple, perhaps in their mid-70s.

"I was so shook up that it took me a minute before I could say anything. Their response was really weird – I know it was a mistake, but they never even apologized. They could've easily killed me or broke me up, but it didn't seem to faze them at all. I told them I didn't know what to do other than call the cops, so the next 5 hours was all about filling out reports and whatnot."

Lane, who runs a Phoenix, contacted company president Gary Clouse, who immediately got a new boat with a Yamaha motor on the road to Okeechobee. Meanwhile, MLF personnel supplied him with a league-owned boat while the Phoenix and Yamaha crews that were onsite went to work on his busted-up craft.

"The cowling was completely smoked, but I think what saved the engine was that the Power-Poles got pushed into it and they acted like sort of a ramp. The other boat went over the engine."

With about 2 hours left in the day, he went back out on the water in the MLF boat to continue practicing. It wasn't a comfortable experience.

"I was a complete nervous wreck. I kept hearing stuff behind me and I couldn't focus on anything. I usually don't get rattled, but this one shook me up. It's going to be tough to get to sleep tonight."

The one consolation is that the service crews were able to repair his boat. They fixed the hole in the top cap and installed a new Atlas jackplate and Power-Pole brackets. It was test-driven and deemed good to go for Friday, when Lane will launch as one of the 40 anglers in Group A.

"I just want to tell everybody thanks for all the calls and texts and to all the anglers for checking on me. Andy Morgan and Michael Neal stayed up with me, helping me strip line off reels so I could get everything done tonight.

"The way the MLF staff and the Phoenix and Yamaha crews handled everything was incredible. I'd have been in a bad mess if it wasn't for everybody involved."