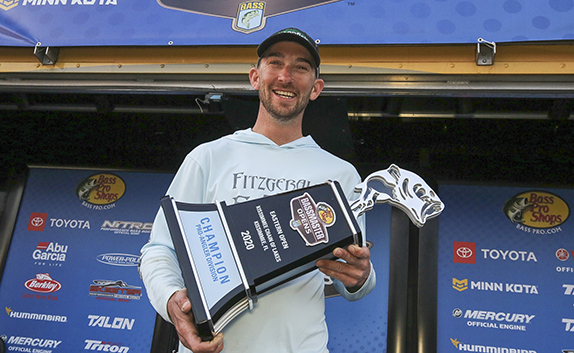 Knowing when to adjust proved essential for Bryan New of Belmont, N.C., who admits he employed a disjointed fishing regimen to win the Kissimmee Chain Bassmaster Eastern Open with a three-day total of 49-08, cementing a spot in the 2021 Bassmaster Classic.

“I’ve said it all week, I haven’t been dialed in to one thing; it was junk-fishing at its best,” said New, who earned $52,500 and claimed the early lead in the race for the Bassmaster Opens Angler of the Year award. “I’ve fished a lot in Florida and I’ve never been able to junk-fish. But you have five lakes in this chain, and I junk-fished three of them (Toho, Cypress and Kissimmee).”

New spent part of day 3 working the offshore hydrilla spot in Lake Toho where he caught part of his big day-1 catch. The first day saw him locking down to Lake Kissimmee, but when that failed to produce anything significant for him, he decided to maximize his fishing time by spending the next two days in Toho.

The junk-fishing mentality came into play when he realized his offshore spot was not going to be enough. From there, he went shallow and bounced from spot to spot in an effort to establish consistency.

New caught his bass on a Texas-rigged green-pumpkin magic Damiki Stinger, a 1/2-ounce green-pumpkin Z-Man ChatterBait with a green-pumpkin Zoom Speed Craw and a Greenfish Tackle G2 square-bill in High Rock shad. The latter, he said, proved to be his biggest producer.

“That G2 is a balsa bait that floats a lot higher than all the plastic baits and it’s awesome for cranking this grass,” New said. “I know a lot of people throw (lipless baits) around the grass, and I actually found my main spot by throwing a (lipless bait). But once I switched to that square-bill, I started catching bigger fish.”

After two days of warm, stable conditions, day 3 brought cooler temperatures and blustery winds of up to 20 mph, which muddied the Kissimmee Chain. Before the big winds picked up mid-morning, New got his final day off to a strong start by catching a 6-01 around 7:18 a.m.

From there, he said keeping his head down and focusing on productivity dominated his thoughts.

“I knew it was a good start, but honestly, I had no idea how big it was,” he said. “I caught it, put it in the livewell and made another cast. It didn’t matter at the time because I knew it wasn’t enough.

“I filled my limit about 10 minutes after that and it took me a little while, but I finally culled the 12-incher that was my first fish. After that, I said let’s go try to bust the dirty-30 (a 30-pound limit), but we didn’t do that.”

“I had one offshore place – a 50-yard stretch of hydrilla in Lake Toho – and I could only catch them in the first hour or two,” Stracner said. “I’d catch a few of my better fish on a ChatterBait out there and after that, they’d shut down.

“They’d start back up later in the day, so in between I’d go to the bank and punch mats with a junebug Reaction Innovations Sweet Beaver and a 1 1/2-ounce weight.”

“I tried to focus on stuff that didn’t look like everything else,” Alexander said. “There are miles of lily pads, miles of Kissimmee grass, miles of gator grass, big piles of bulrushes, big piles of reeds. So if I saw a bunch of the same, I’d just keep on going.

“I was trying to pinpoint those areas that had a uniqueness to them or had a really good blend of different vegetation. Then I’d try to pick out the most isolated cover in that spot.”

Alexander caught his bass on a watermelon/green fleck Senko and a junebug Zoom Speed Worm.

Jerrod Albright of Kissimmee took big-bass honors with a 10-03 largemouth.

Here are the final totals for the top 12: