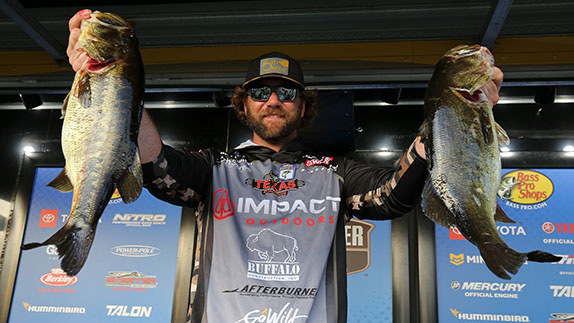 Consistency was in John Hunter’s favor, as the Simpsonville, Ky., angler added 18-13 to the 18-06 he weighed on Wednesday to total 37-03 and take the day-2 lead at the Kissimmee Chain Bassmaster Eastern Open.

Hunter attributed his success to one special spot he described as a thinner area within a large, dense grass bed in 6 to 7 feet of water. The spot produced his weight both days, but Hunter said the day-2 mood was significantly different from that of day 1.

“My first two fish were 4 1/2-pounders and then I lost two 5-pounders right after that, which was heartbreaking. But they stayed fired up and I was able to catch the rest of my weight in the next 20 minutes.”

A mix of reaction baits and dragging-style baits produced Hunter’s catch, but the former carried most of the weight.

Noting that most of the fish he was catching in practice were pre-spawn bass, Hunter said day 1 delivered a mix of pre-spawn fish and some that were thin for their size – likely post-spawners. His day-2 catch was mostly post-spawners.

“That’s what I like about this spot – I have a chance of catching a fat pre-spawner coming in, and it’s a good stopping place for a post-spawner to gang up,” he said. “This is a good place for them to set up, feel safe and feed before they go in and out (of the spawning flat)."

Hunter said he’s cautiously optimistic about returning to the magical spot on day 3. He said he leaned on the spot hard today, but seeing it reload significantly from day 1 was encouraging.

“I’m a little concerned that it’s running thin, but hopefully it will reload again, so fingers crossed,” he said. “That’s one of the only things I have working right now. Tomorrow, with fewer people on the lake, it will be a lot more open. I’ll have some room to move around on some other things that I’ve found in practice but I haven’t been able to fish well because there were so many boats there.”

Losing a 6-pounder and a 5-pounder on day 1 was not the way Jason Casteel of Winter Garden, Fla. wanted his first Bassmaster Eastern Open to begin. Losing his front depthfinder and dumping another 5-pounder on day 2 didn’t help, but relying on his faith and keeping his cool allowed him to fish his way into 2nd place with 36-08.

Thursday's limit of 22-05, which included an 8-14, bolstered the 14-03 he weighed on day 1. Casteel found his fish in a deeper spawning area with hard bottom surrounded by grass in about 8 feet of water.

Bryan New of Belmont, N.C., is in 3rd place with 34-07. He remained in Lake Toho all day and found all of his bass on the same offshore hydrilla spot he fished on day 1. Mixing it up with a square-bill and a Zoom Ol' Monster worm, New added 13-07 to his 21 pounds on day 1.

“This morning, it was lights out; my co-angler and I caught them on almost every cast until 9:15 and then it was like a light switch,” New said. “I’d catch one 45 minutes later and never got another bite. After that, I ran around and culled up about half a pound once.”

Jerrod Albright of Kissimmee, Fla., is in the lead for Phoenix Boats Big Bass honors with his 10-03.