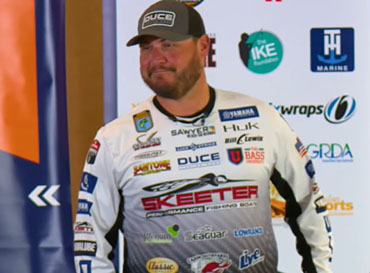 It’s springtime and the six boats ahead of you are throwing square-bills, swim jigs and ChatterBaits. If you listen to Louisiana pro Cliff Crochet, the solution is not necessarily to leave, but rather to fling something new. Well, not really new. He likes a spinnerbait in that situation, and as those other baits have risen in popularity, its usage has waned.

While even a novice can throw out a spinnerbait and catch some fish, Crochet believes that tackle choice is critical. He prefers a composite rod from Duce. “It’s good across the board,” he said, meaning that it can be used for this purpose, but also for ChatterBaits, Whopper Ploppers and other moving lures. “I can do a lot with it by changing the line between fluorocarbon and braid,” he added. “I might have eight of them on the deck.”

If you prefer graphite exclusively, there are some good choices out there. He’d pick a 7-foot medium-heavy Duce Echo. No matter which one you choose, make sure it gives a little bit in the tip on the hook set, but don’t go too soft. “You don’t want a wet noodle.”

Whichever rod material(s) you use, pair your spinnerbait stick with a 7:1 gear ratio baitcasting reel. For extreme slow-rolling, a slower speed might occasionally be better, but the 7:1 can cover just about every retrieve with just a little bit of behavioral modification. He’ll spool it with 15- to 20-pound Seaguar InvizX fluorocarbon for most of his presentations, but will upgrade to 50-pound Seaguar Smackdown Braid around grass or water lilies.

Once you’ve dialed in your tackle, it’s critical not to have a gorilla-like hookset. “He’s going to set the hook on himself,” Crochet said. That means for the typical strike you just want to rotate your lips, lean into the fish, and keep reeling. On those occasions when the bass knocks slack into your line, you’ll need to reel up the slack before leaning into it.

While he has favorite spinnerbaits, he doesn’t get wedded to any individual. All of them – no matter how strong the wire – will eventually break, so if he has any doubt (particularly on tournament day), he’ll cut it off and salvage the components for future use. “Every time you bend that wire, sooner or later it’s going to break,” he said. “It’ll break your heart down the way.”

He’s super-attuned to a wide range of external factors when choosing which spinnerbaits to tie on. “Conditions dictate everything,” he said. His blade choice, preferred skirt color and skirt material and weight may vary as water color and temperature morph. The cover he’s fishing also plays a role. “If I’m in grass, I want to be in and out of the grass … or above it,” he explained. On the other hand, when he’s fishing around wood cover, he’s sure to add a lot of twitches to his retrieve.

If you want to learn more of Crochet's comprehensive spinnerbait system, including how he chooses which model to use, and why and when a red “kicker” blade is critical, check out his video, available only by subscribing to The Bass University TV.