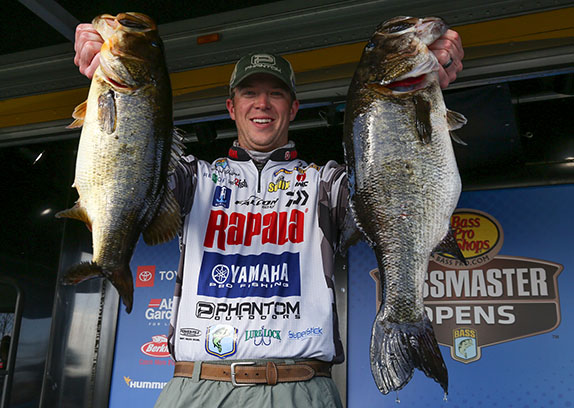 Bassmaster Elite Series pro Patrick Walters had approximately eight hours on water on day 1 of the Kissimmee Chain Bassmaster Eastern Open, but he needed less than 20 percent of that to catch a five-bass limit weighing 21-04 that gave him the initial lead.

Around 10:30 a.m., Walters found himself without a keeper. But once the show started, it happened quickly.

ōI caught all my fish in an hour and a half because after 12 oÆclock, I didnÆt catch another fish,ö he said. ōI started deep, bouncing around a lot. I found a bunch of fish offshore in practice because the shallow bite wasnÆt really any good. They were dropping the water, it was a full moon ¢ there was something holding those fish back a little bit.

ōYesterday afternoon, right before we came to the meeting, I found a couple more areas where it looked like the fish had pulled up on the bed. Today, when nothing was happening out deep, I ran shallow and it happened quick.ö

With a 7-13 largemouth anchoring his limit, Walters said he was targeting spawning fish, but he was not sight-fishing. Rather, he was making 15-yard fan casts to promising areas.

ōIt was on the outside a little bit, they werenÆt way in there where youÆd want them to be spawning,ö he said. ōThey were a little further out on the first actual spawning cover. The water has been warming up 2 degrees every day; it was 77 today. TheyÆre definitely making a push. I think theyÆll make an even bigger push tomorrow.ö

Walters took a unique approach, targeting his fish with a Tokyo rig ¢ a setup that has a weight suspended from the eye of a hook. This allowed him to present a traditional soft plastic in a horizontal fashion and, most importantly, with strategic precision.

ōI was dragging a Zoom Zlinky (stickworm) on the Tokyo rig with a 1/8-ounce weight,ö he said. ōIÆd throw it in there and let it sit for 30 seconds.

ōThe Tokyo rig keeps the bait of the bottom about 2 1/2 inches. The best thing is that it will fall vertically, whereas, if you have the worm on a Texas rig, it glides. YouÆre casting at a hole thatÆs the size of a basketball so if the bait glides, youÆre already out of the spot. When the Tokyo rig lands, it goes straight down."

Bryan New of Belmont, N.C. was in 2nd place with 21-00. Despite breaking the 20-pound mark, New described an exasperating day devoid of consistency.

ōI wanted to catch spawners and it didnÆt happen, so I ended up junk-fishing,ö New said. ōIt wasnÆt one thing. I caught three big ones doing three different things. You canÆt just go do that and expect to catch big ones every day. I was flipping some pads and hydrilla, I caught them on a ChatterBait, a Rat-L-Trap and some on a worm.ö

Joshua Stracner of Vandiver, Ala. was in 3rd place with 19-05. His catch included an 8-11 largemouth that he caught flipping a Reaction Innovations Sweet Beaver.

ōI lost a 3 1/2-pounder that would have helped, but that was the only other big one I saw,ö Stracner said. ōI did a lot of punching mats with a big weight and I hit four or five offshore spots. I was just bouncing back and forth in Kissimmee.ö

James Castillo of West Richland, Wash. took big-bass honors for the day with an 8-12.