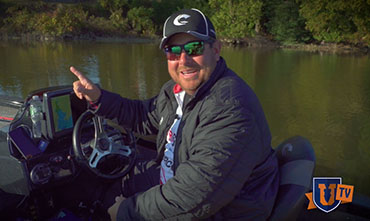 John Cox has made a career out of finding hard-to-access areas that are loaded with bass. Sometimes they don’t pay off, he said. A promised creek channel might not actually exist, or he might reach the promised land and find few biting fish around, but when they pay off they often do so in a big way.

A big part of his success in this arena is his Crestliner boat, which draws less water than most fiberglass vessels, but he also outfits it carefully to ensure maximum performance in the skinny stuff. “I set my boat up perfect for these situations,” he said. When idling, he sets his hydraulic jackplate all the way up to minimize drag. “I can actually lift my motor straight up with it in the trimmed down position.” By setting the trim just about where it breaks free of the motor bracket, that allows him to move forward in as little as 8 to 10 inches of water.

He watches the maps on his sonar, but supplements them with satellite imagery on his phone to keep them honest.

When he can no longer use his big motor to propel the boat forward, he’ll get on the trolling motor to ensure further progress. Unfortunately, in the down position a trolling motor will often bottom out in these areas, but he’s long used a decidedly low-tech solution to this problem – he puts his sandal under the bracket to tilt the motor up into a position where the trolling motor blades are barely in the water.

While he eventually wants to be able to run these areas, he utilizes caution during his initial explorations. “You never want to run into these places without being in there before,” he explained. A rock bar or unfortunately-situated log might make for a long and expensive day. Instead, as he heads in on the trolling motor he’ll keep his eyes peeled for those obstacles and drop waypoints on them to ensure that he doesn’t hit them during a later trip. Another low-tech solution that he uses – when it’s within the rules – is to get out of the boat and plant tomato stakes in places where the water is shin-deep or deeper. That provides a visual guide to his eventual pathway.

Even though he lightens up his boat as much as possible, both so it’ll float shallower and in case he has to push it a long distance to get free, there are occasions when any angler gets stuck, and Cox is no exception. Once again, if the rules allow, he may elect to get out of the boat and push or pull it off. Otherwise, he’ll get to the front of the boat and drop the trolling motor. Then he’ll steer the boat hard to the left, and hard to the right, repeatedly until he’s hollowed out enough area to get the bottom to release its suction.

If you want to get more insight into how the only current two-tour pro finds unpressured honey holes, including his “30-yard rule” for running over shallow hard bottoms, check out his video, filmed on the water, available only by subscribing to The Bass University TV.