Chalk Talk: How to fish a swim jig with Cox 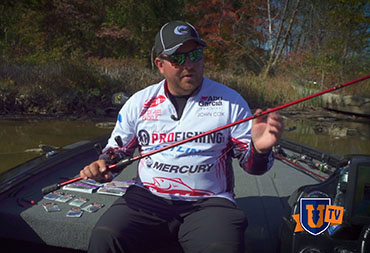 John Cox notably won the 2019 FLW Tour event on Lake Chickamauga with a Dirty Jigs swim jig, but the lure has been a critical part of his arsenal for a decade, and he’s developed a system that enables him to maximize its success in a wide variety of situations. Now, for the first time, he’s giving up the goods. “I have not shared this with anybody,” he said.

The same half-ounce Dirty Jigs swim jig that brought him to the technique a decade ago is still his primary tool, although he uses two different models – the No-Jack version with a heavier hook when he’s using braid, and the Original with fluorocarbon. Fluoro gets the call the minority of the time, typically only when it’s really cold, the water is really clear, there is a lot of pressure or he wants to get the lure deeper in the water column.

“Ninety percent of the time I’m swimming it on 40-pound X5 Berkley braid,” he said. The rest of the time it’s 15- or 17-pound fluorocarbon. When it’s cold, he deadens the heavy popping action he imparts in warmer temps. “More steady retrieving than working the jig like I do with braid,” he said.

The half-ounce version gets the call almost all of the time. Rather than increasing or decreasing the weight of the jig, he’ll simply modify his retrieve. Cox fishes the jig straight out of the package with no modifications.

Because he uses braid so much, he likes a rod with a soft tip to prevent pulling the jig away from the fish. His current favorite is the Abu Garcia Veracity 7’4” medium-heavy, moderate fast. He pairs it with a Revo XS high speed (9:1) baitcasting reel.

Cox keeps his color choices simple: He starts with black and blue when it’s colder, with water temperatures in the upper 50s, starting with a black sapphire chunk and then moving to straight black as the water heats up. As the temperatures get into the upper 60s, he’ll switch to Alabama Bream, which he called “by far my favorite,” pairing it with a watermelon/red chunk. As the shad spawn starts, he’ll switch to a white or shad-colored jig, which he pairs with a white chunk. In each case, his trailer of choice is the Berkley PowerBait MaxScent Meaty Chunk, his all-around favorite. “This is the only chunk I swim,” he said. “I swim it, flip it, everything.”

If you want more insight into how one of the hardest working anglers on tour maximizes his swim jig success, including discussion of retrieves and proper rod angles for each one, check out his full video available only by subscribing to The Bass University TV.