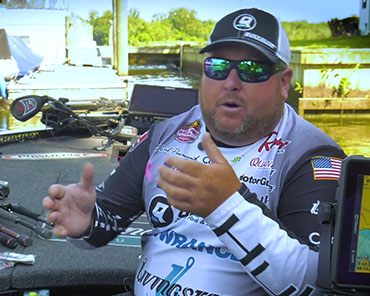 No matter the season, if Virginia pro Jacob Powroznik can find some seawalls on the lake he’s tackling, he’ll try to pattern them into a viable fish-catching strategy. It has paid off handsomely, with both a near 10-pounder that he caught during a Florida Elite Series tournament and a 12th-place finish at the 2017 Classic on Lake Conroe. Indeed, Conroe, with its miles of seawalls, is primed for this approach, but Powroznik has excelled on seawalls even when they’re much less prevalent. The key is to take a seasonal approach.

When bass are spawning, he’ll look for flat areas in front of the walls that are susceptible to building a nest. When sight fishing is feasible, he’ll break out his 7’10” Quantum flipping stick, a high-speed reel and either 50-pound Hi-Seas braid or 25-pound Hi-Seas fluorocarbon, but much of the time he’ll go to the other extreme. “I’m a spinning rod guy in the spring,” he said. He’ll use a 6-inch V&M Flat Tip Worm on a dropshot or shaky-head not only to fill his limit, but also to catch some surprisingly large bass.

When bass start guarding fry, they use seawalls as a means of protecting their young from attacks. Under that scenario, Powroznik will employ a V&M Chopstick wacky-style, always in some combination of green-pumpkin or watermelon. “How many black and blue bream have you seen?” he asked rhetorically. “I’ve never seen one.” He approaches the seawalls quietly and casts to likely spots, keying on shade. He’ll also utilize topwater baits, including the Livingston Walking Boss and Walking Boss Jr., along with the Walk N Pop, which builds upon many of the best attributes of the old P70 Pop-R.

At Conroe, the shad spawn was in effect, and Powroznik ended up fishing many of the same areas as Edwin Evers. He likes a square-bill and a jerkbait at this time of year, but a spinnerbait first thing in the morning is hard to beat. “I always love a hammered blade,” he explained. Presentation is key. You should bump your boat right up against the wall if possible and then bring your bait back as closely as you can. “You want your bait to come parallel right through the nest or the balls of shad when they’re up there spawning.”

As the year progresses, he’ll start looking for deeper seawalls, particularly those with docks or other abnormalities. Even if there are multiple docks along a particular stretch, one or two will have characteristics or features that end up concentrating more bass.

“If you’ve got a hundred docks and they’re all 4 feet deep and then you’ve got one dock that is 8 feet deep, that’s the dock that I want to be fishing.”

If you want to learn some of the other ways in which Powroznik adapts his seasonal approach to fishing seawalls, check out his full video, available only by subscribing to The Bass University TV.