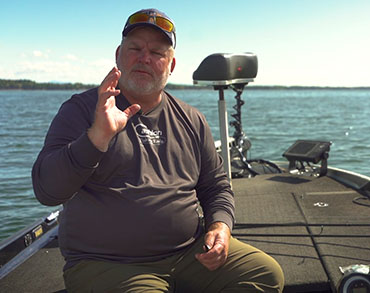 Bass University founder Pete Gluszek has had substantial success with jigs and creature baits over his lengthy career, but in recent years he’s relied heavily on a beefed-up version of a jighead and worm combination to grab bites when those lures won’t. He especially likes a Senko in this scenario, and explained that “To me, this is just an upscale shaky-head.”

It works because it’s dense and bulky, which means you can fish it deeper and in current without losing touch with the bottom. “This falls fast and it falls erratic,” he said, explaining why it generates bites. “It’s also exceptional around current situations” because it “sticks” to the habitat.

“Mag” doesn’t mean one-size-fits-all. Gluszek uses both spinning and baitcasting gear for this technique, making just enough changes to ensure that he gets the most bites and puts the majority of them in the boat.

Spinning gear gets the call in open water with “not quite heavy cover.” That means bare gravel points, rocks and dock pilings, often in clear water. He likes a Cashion P90472S, a 7’2” rod made specifically for shaky-heading, and he pairs it with a large-spooled 4000-sized reel. He uses 15-pound Gamma Torque braid as a main line, and then adds a short leader – typically only 4 or 5 feet – of 6- to 12-pound Gamma Edge fluorocarbon. Just because it’s spinning tackle, though, doesn’t mean he uses a finesse head. Instead, he wants a minimum of a 4/0 hook and “pretty substantial wire.” One modification he makes is to trim the cylindrical worm keeper on the head so that the lure falls off of it when he sets the hook, ensuring a solid hookup. “You don’t want a long keeper here.”

When he’s around zebra mussels, brush or barnacles, he’ll beef things up with baitcasting tackle, specifically a Cashion F90473B flipping stick and a reel spooled with 40- or 50-pound braid. “My leader is beefed up, too,” he explained, usually 20- or 25-pound fluorocarbon, but sometimes as much as 30.

While he wants the lure contacting bottom at all times, the fast fall allows him to cover a lot of water. “Don’t let grass grow under your feet,” he said. There’s no need to soak the bait excessively, so keep moving until you locate the fish.

While he’s picky about his rods, reels, line and jigheads, Gluszek keeps his color choices remarkably simple. He likes black in many situations, as well as a shade of green – usually watermelon or green-pumpkin – when conditions demand a more natural shad. If there are smallmouths or spotted bass around, he’ll almost always dip the worm’s tail in chartreuse dye. That’s it.

If you want to learn some of the other secrets to Gluszek's magnum shaky-head system, including why you should definitely keep your hands off of the reel during the cast and as the lure falls, check out his full video, filmed on the water, available only by subscribing to The Bass University TV.