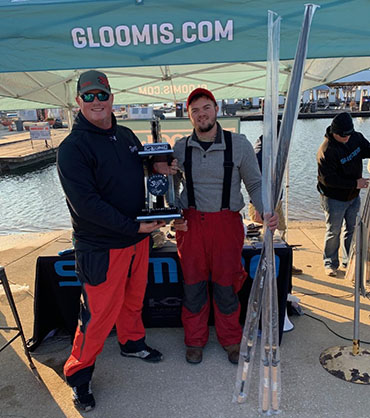 A chilly morning on Kentuckys Lake Cumberland last Saturday  temperatures hovering right at freezing at the 8 a.m. blast-off  led to some hot bass fishing for the team of Asa Adams, from Broadhead, Ky., and Logan Gabbard, from Richmond, Ky. Competing against 128 teams, they took top honors at the G. Loomis Skeleton Cup owners tournament, taking home $1,000 in cash along with two G. Loomis Conquest CNQ-843C rods valued at $1,300 by catching more than 22 pounds of largemouth and smallmouth bass. Gabbard added to his winnings by also weighing in the largest bass, a largemouth that tipped the scales at 5.44-pounds, to also take home an NRX-854C JWR rod valued at $550.

All part of saying thank you to G. Loomis rod owners, the annual Skeleton Cup is a no-entry-fee team tournament paying out more than $13,000 in cash and G. Loomis tackle. Adams was using a G. Loomis NRX rod, while Gabbard was rigged up with IMX-PRO, both purchased from The Cain Pole in Richmond. One of the 30 tackle shops in Kentucky that supported the tournament, The Cain Pole owner Kent Lewis now gets to display the special traveling Skeleton Cup trophy engraved with the winners names in his shop until next years event.

Everything about the event was about everything that is good in bass fishing, said Isaac Payne of G. Loomis. Bass anglers from around the state having some competitive fun on Lake Cumberland, tackle dealers who are able to thank those anglers for the support they have given them, and the staff at Conley Bottom Resort that couldnt be more accommodating so that everyone involved simply had a great time. Im already looking forward to next fall for the 2020 tournament.