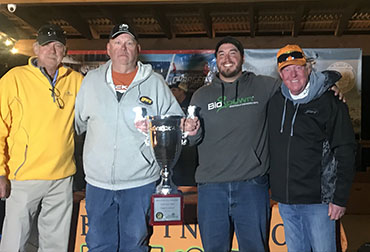 A change in the format of the BassingBob Missouri Invitational Pro-Am Fishing and Golf Championship worked in the favor of Andy Newcomb and Chris Bridges.

After the first two days of fishing, FLW Series angler Andy Newcomb and his amateur partner Chris Bridges sat in 2nd place with 10 bass weighing 32.84 pounds. Newcomb admitted he was “not a good golfer,” so it was an easy decision for he and Bridges to opt for fishing over golf on the final day. They made the smart choice as they weighed in a 12.20-pound limit for a three-day total of 45.04 pounds to win the tournament and the top prize of $25,000.

Finishing only three-hundredths of a pound behind the winners was the team of Justin McClelland and Denise Dill with 45.01 pounds.

Pairings were determined by the amateur anglers bidding in live and silent auctions for the pro anglers they wanted as partners for the three competition days.